As previously noted, Another Timbre’s releases cover a broad spectrum, from world-renowned composers and players, through those who are upwardly mobile, to those making their debut on the label. In addition, although the label is firmly established in Sheffield, England, it continues to cast its net far and wide in search of interesting, innovative and exploratory music, a point emphasized by the two albums below, both of which were included in a batch alongside the far more famous Magnus Granberg, and Eva-Maria Houben.

Korean-born Kunsu Shim is totally new to the label, while the Argentinian composer Gabriel Paiuk’s only previous appearance was contributing piano to, mixing and mastering the label’s 2012 release Unbalanced In (Unbalanced Out) alongside Barry Chabala, Bonnie Jones, Louisa Martin, Tisha Mukarji and Toshimaru Nakamura…

Kunsi Shim was born in South Korea in 1958, the son of re-migrants from Japan. After studying composition at Yonsei University in Seoul, he moved to Germany in 1985 and studied further there. He now resides permanently in Germany. As with some other composers issued on Another Timbre recently, Shim has rather a short discography. The first time he featured on disc was with two tracks (one of which had a duration of four seconds…) on the album Shim, Schlothauer, Werder, Inderhees (Edition Wandelweiser, 2001) which he shared with the others named in the title; his longer track on that album was “Relations,” composed in 1995, which also features here. In the interim period only five other recordings featuring Shim have been released, meaning that he averages an album every three years. Nonetheless, his music has been featured at concerts in many countries and he has been the recipient of numerous awards as well as being artist or composer in residence at several places, including the Museum of Contemporary Arts, Chicago.

Of this album’s twelve tracks (counting the three parts of “AUS DER KLEINSEITE” as separate tracks) six are Shim compositions, with the remaining six being by different composers, four being by friends of Shim (Arnold Marinisser, Amnon Wolman, Anton Lukoszevieze, Alwynne Pritchard) and reflecting aspects of his work. The album is unified by the fact that ten of the twelve tracks were performed by the Dutch Luna String Quartet who clearly are well tuned into the composers’ wishes. The opening and closing tracks are the exceptions as they are live recordings dating from February 2018 while the others were studio-recorded in July 2021.

Despite the exalted company, Shim’s own compositions more than hold their own and practically dominate the album, particularly the three-part piece. Shim’s debut having been on Edition Wandelweiser makes perfect sense once one hears this music, as it shares that label’s saving of every sound and use of space. This is a very promising album from Shim which raises hopes that his next release will not take three years to appear and that it will be all his own compositions. 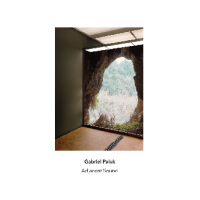 In some ways Gabriel Paiuk’s story has faces which resemble Shim’s. Paiuk was born in Buenos Aires, Argentina, but has lived in The Netherlands since 2010, after a period of some years when he visited Europe more and more frequently. Unlike Shim, rather than going straight to composition, his route went via jazz and then into free improvisation; His winning of the Gaudeamus Composition prize in 2006, for his second electronic-based work, led to a scholarship to carry out a Master’s study at the Institute of Sonology in The Hague. In another similarity to Shim, although Paiuk’s first album appearance was on Ficta (Creative Sources, 2001), the current album is only his eighth, the last being the 2012 Another Timbre album mentioned above.

Unlike the Shim album, this one comprises four compositions all by Paiuk, dating from 2005 to 2019. Although the four pieces are by Paiuk, each was recorded by a different person and the album gives no indication of when or where they were recorded; In addition, each track was performed by a different individual or ensemble, the ten-strong New European Ensemble for the opener “The Construction of an Imaginary Acoustic Space,” solo cello for “Disyunción,” solo piano for “El Mismo,” and the clarinet trio Ensemble Modelo62 for the closer “Cuando ya no importe.”

Such diversity could easily have made this album end up sounding like a compilation or sampler of Paiuk’s work. It is a testament to his skills as a composer that the album is far more coherent than that and ends up sounding as if the pieces were intended to be heard together irrespective of when they were written and what stage Paiuk was at in his musical development. As with Shim’s album, this one must be considered a success and leads to hopes that Paiuk’s next album will not be too far behind.