Torf is a download-only label founded just this year in Poznań, a city that lies along the Warta River in western Poland. So far, the label has three releases, which generally revolve around a core of reedist Michał Giżycki and percussionist Michał Joniec. The music is understood but buzzing with figurative, acoustic electricity. It is exciting. For a hint of what each recording entails, just view the cover art of ink stains by Weronika Lutkiewicz. Like the music, they are simple (shades of white and gray) and unpretentious but on, closer look, are also finely hued, roughly textured and curiously evocative.

Matthias Müller is a versatile trombonist. If you have heard much of his work you have likely also noticed his proclivities toward patient extended techniques and a breathy, buzzing minimalism. On +Q, Müller joins bass clarinetist Michał Giżycki for an exploration of gurgling swamps, irregular drones and almost sterile acoustic landscapes. The subtlety of tones, the faint on-and-off underlying drones and the crackling textures on these two tracks – + and Q – evoke some underlying electronics, but all sounds are coming straight from Müller and Giżycki’s horns.

These pieces have some direction, or at least a gradual crescendo in volume and sound density, and they explore similar terrain as Nate Wooley has in his solo work, albeit with less hush and more pulse. Aesthetically, +Q is a wonderful pair of quizzical duets. It does not hurt, however, to listen closely a few times to tease out the finer notes and, above all, some crumbled but tender circular breathing, especially on the part of Müller. At 30 minutes, this is a short one, but one that also yields new striations and other small surprises with each new listen. 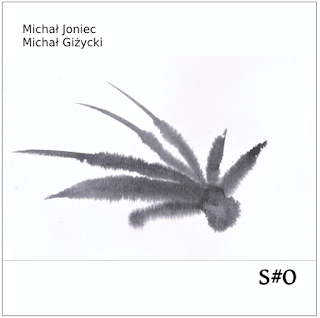 S#0 is the latest recording by the duo of Michał Joniec and Michał Giżycki. Giżycki expands his toolbox to include a tenor saxophone in addition to the bass clarinet he tangled around Müller’s brass on +Q. Joniec deploys what is simply called his “metal rubbish universe,” an apt term for the understated clatter that strings throughout these four pieces. The result is terribly abstract and, as far as I understand, wholly improvised, but lively.

Giżycki leans towards clucks, short strings of sixteenth notes, and other fractured phrasings, though he remains intent on playing with and within silence, as well. He even turns toward extended sections of gnarled circular breathing whose affinities with Evan Parker are unmistakeable. It is this balance that makes Giżycki’s performance on this release truly noteworthy.

Joniec meanwhile busies himself with whatever metallic array of lost, discarded, found, and repurposed implements he has in front of him. I am not sure what if any of this rubbish is traditionally considered percussion, but that just adds to the mystery and the soft dynamics cause the listener to really squint to hear isolated and muffled clanks, or maybe just implied sounds, and to disentangle the percussive Objects from the instruments, which is as false a distinction as that between atonal, nonmelodic yet intentional noise and music. Another fine release. 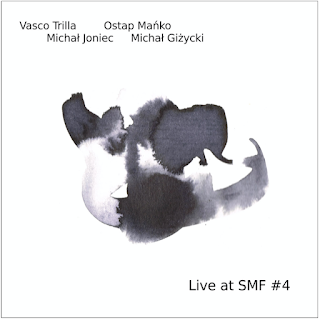 Live at SMF #4 was recorded at the 4th Spontaneous Musical Festival at the Dragon Social Club in Poznań. On this recording, Ostap Mańko wields the violin, Michał Giżycki plays the bass clarinet and tenor saxophone, Michał Joniec dives deeper into his metal rubbish universe and Vasco Trilla – likely familiar to some through his releases on MultiKulti, Fundacja Słuchaj!, Creative Sources, Clean Feed and others – helms the drums.

This is the fullest sounding of the releases here. Joniec and Giżycki approach this single 36-minute performance starts with more oomph than the other, pared down releases. That said, much of it is still somewhat understated and open, despite the larger ensemble and charged energy. And maybe that is part of its aesthetic: this is about generating, rather than unleashing energy. Much of the track is devoted to pulses and fluctuations. Mańko flutters at times, echoing Giżycki’s own quaver. Joniec, as before, and Trilla rummage through their pile of objects making odd nervous clatter and seem of like mind in the pursuit.

All four, however, frequently opt for hushed, intimate sounds, wherein the listener can really hear the complementary tones and timbres, a steely rattle here, a tightly plucked violin melody there, an extended breathy bass clarinet trill and who know what lignous scrapes elsewhere . In a way, this is sound-painting, with disparate slashes and strokes slowly revealing more coherent curvatures and lines, then shapes, then some sort of a landscape just clear enough to make out the hills but hazy enough to question whether the image is actually figurative at all.

If Live at SMF – or any of these releases for that matter – is at all representative of what is going on the scene today, I (or we) have been missing out on yet another exception to the now rather threadbare rule that good experimental music inevitably gravitates around a few free music capitals. Or, maybe we just need to broaden our search, expand the list, and add Poznań to it.