Os passos sequem como um espelho is a collaboration between guitarist and, on this release, acoustic turntablist Ferran Fages and sound-sculptor Pedro Chambel, who appears on electronics, alto sax and voice. The title translates to “the paths follow as a mirror,” which is gives the listener some insight into the reflexivity and interiority that this album evokes in its strange sonic scenery, which, in good postmodern transcendentalist fashion, reflects the state of mind of the listener as much as any fixed meaning or mood that might exist out there, in the album.

In short, Os passos, is an eerily shimmering study in electro-acoustic minimalism. Tema 1 is united by ringing, some extended hums and arced scrapes, some jittering. Three minutes in, the fuller tones drop to a soft but rough crackle that waves between left and right speakers. Pages and Chambel explore this terrain for the remainder of the piece. Tema 2 is based around a repeating pair of tones, one after the other. Around these shimmer other hums and squeaks that give the impression of a slowly and irregularly turning metal mobile propelled by the gentle gusts of a synthetic wind. In that sense, it is like sitting outside on a humid day watching the clouds and the birds go by. (Virtually, of course.) Who knows how much time has passed? Tema 3 takes a different approach rooting the track in crackles and what sounds like field recordings of rain and wind, the latter of which might be Chambel’s breath through the saxophone. It is hard to tell, but that is the point. This is about the finished product, the aggregate of sounds, rather than traceable individual elements. By the end of the track, the sounds bubble and erupt as if one is walking a path through some alien mechanical swamp. (Is this activity sterile or vibrant, or does that binary not quite capture it?) We (myself included) describe too much as dystopic these days, and I am honestly not sure that this goes quite that far. That said, this is strange and it is unsettling, in the ways that its paths do not necessary lead anywhere in particular, do not answer any questions, and melt into the landscape in such a way that one has trouble determining where these sounds, this music, is really coming from.

Pedro Chambel – Another View From Another Place (Self-released, 2021) 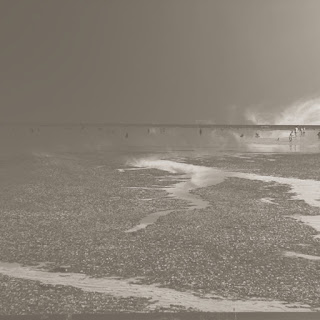 Featuring Pedro Chambel on electronics, alto saxophone and tape,
Another View From Another Place is quite different from Os passos. The minimalist tendencies are still there, but Another View has a lot more nervous energy. The pulses are quicker and glitched. Many of the sounds, especially in the opener, elect + ste 000 + ste 002 – 2, are muddy. The saxophone is more discernible from the other elements. It sounds urgent, even. Indeed, this other view and other place capture a very different feeling, as the second track’s ringing sine-wave opening and the gurgles and growls that back it suggest. If Os Passos offers some sort of relief in the act of carving sonic pathways and reflection – is the message really in the self or, to bastardize Marshal Macluhan, is the message really the mirror which contains the reflection? – Another View offers more energy, but also more literally and figuratively static. There is simply less motion in these four pieces that fluctuate and change, sometimes drastically over the course of each track, but that are tethered by a single underlying tone, whether a sine-wave or oscillating soft locust buzz or fluttering synthesized tones. The saxophone fills out each of these tracks and they are all the richer and more nuanced because of that acoustic and human element. Still, this is somewhat more entrenched, at least until the final cut, elect + wv + 002+001-4, when Chambel uses his sax to rise above the electric chain, which nevertheless outlasts Chambel’s agitated flusters.

Another View from Another Place
is available as a CD and download here. 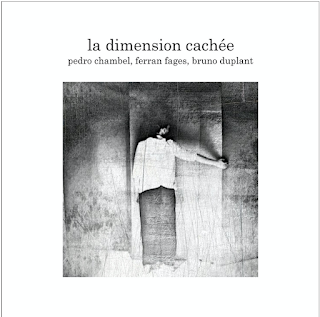 “La dimension cachée” is a release by the trio of Pedro Chambel (again on alto saxophone and electronics), Ferran Fages (again on acoustic turntable) and Bruno Duplant (on instruments, electronics, and photographs). And, it is the best of the bunch. Chambel’s sax returns to huffs and wind, only here it is layered with field or synthesized sounds that blur the boundary between the acoustic and the electronic. A soft drone enters, which sounds like a single organ chord extended. ambient tones, which add warmer tone colors to the emerging piece, which suddenly sounds full but not cluttered. space. Scrapes turn into whispers which fade into buzzing and rumbling and rummaging. If the listener let’s their mind drift, this sounds like a beautiful piece of ambient music that simply bobs on a calm sea of ​​sound. isten’s closely, however, the elements almost form a narrative, however inscrutable and fragmented it may be.

With the obvious caveat that the gap between the intentions of the artist and the perception of the listener might be vast, la dimension cachée seems less a mirror of the listener’s inner mind. There seems to be more there out there. The shades – alternately ominous and bright – seem clearer even if this all exists in a huge gully of shadows, mire and ambiguity. Moreso than Os passos and
Another View, la dimension evokes an expedition through somewhere disorienting and disconcerting (especially in the cavernous second cut) but through which the music, the artists and the listener pass to the cathartic effect once the final sounds decrescendo and evanesce.

La dimension cachée is available as a CD and download here.