German trumpeter and New York resident Thomas Heberer stands with one foot in jazz tradition and one foot in avant-garde music. On this album he is joined by another German expat in the US, Ingrid Laubrock, on tenor and soprano, with John Hébert on bass and Michael Sarin on drums.

Two elements strike immediately when listening to the album. The first is its compositional inventiveness, multilayered, sometimes odd-metered, with interesting harmonic shifts, deeply rooted in jazz but with a creative tinge and unexpectedness that makes it more modern. The second is the warmth of the sound, including bass and drums, but especially of the trumpet and the saxophone, and it must be said that the sonic cohesiveness of Heberer and Laubrock is at stunning times. They never recorded together, but I hope it’s not the last time.

For once, I must refer to the liner notes of the album for more insights. They describe the structural elements of the pieces, so there is no need to repeat them here. Just one element to add: Heberer’s compositional diversity to shift the tone of the pieces of sadness from to joy without jeopardizing the balance of the total picture. “Caro Book” (dedicated to the violinist and composer Carolin Pook) is joyful, upbeat and fun, and is immediately followed by the dark and melancholy”Then There Were Three‘, which in itself also contains a little joke because it starts with only three instruments, until Sarin joins halfway with a drum solo – and then there was one – before the whole band comes together again for an abrupt ending.

Last year’s trio album “Remedy” was already easy to recommend, and so is this one. This is modern jazz at its best: creative, complex expressive, cohesive and welcoming.

Heberer is also a member of the Dutch Instant Composers Pool Orchestra for almost thirty years now, and we will give an update on their recent work tomorrow. 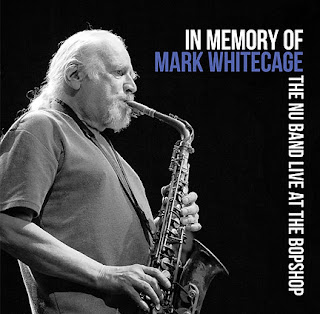 The Nu Band was the brain child of drummer Lou Grassi and the late trumpeter Roy Campbell Jr. who created the quartet in 1999 with Joe Fonda on bass and Mark Whitecage on alto sax and clarinet. When Roy Campbell died in 2014, Thomas Heberer took his chair in order to complete the fully booked agenda of the band.

In March 2021, Mark Whitecage passed away, and the band continues to perform with Kenny Wessel on guitar replacing the saxophonist.

The band has always had a very democratic and open approach to leadership and compositional preference, resulting in a creative open mix of improvised music. Even if most pieces have some compositional and structural backbone, they are often an excuse for lengthy improvisations and generous interplay. The music oscillates between calm and spiritual moments to highly energetic and nervous boppish moments. The first two tracks illustrate this perfectly. The opener begins with Whitecage on diné flute, a quiet and subdued piece, followed by the Ornette Coleman-ish “Five O’Clock Follies“.

This album – as you might have guessed – is a tribute to the legacy of Mark Whitecage, and the liner notes provides short texts by all musicians about what Whitecage meant for them. I will just repeat a few sentences from Joe Fonda’s text, because I think they’re not only to the point with regard to Whitecage, but possibly also for the whole band in its various configurations: “Mark always came to the music and to the performance without his ego. Never do I remember, ever seeing him perform and get caught up in his ego while the music was being being played. It was always a spiritual process for Mark to play music It was always a selfless act. It was always about what he could give to the world through his music. I loved the fact that Mark played from his body. He had a special Groove a special rhythmical reality that he could create whenever he wanted to make the band groove.

The album also has a rendition of “One For Roy“, an open-textured flowing composition that gradually unites diparate sounds a common form, and that also figures on Heberer’s “The Day That IsThe other track by the trumpeter – “The closer you are, the Further it Gets” – also figures on last year’s “Remedy”.

The album ends with the beautiful “Dark Dawn In Aurora”, a slow and sad Grassi composition that we already know from the “Cosmological Constant(2015) on which both Heberer and Whitecage give hair-raising bluesy solos, a moving and deep performance that presents an adequate finale.

Like with most albums of the Nu Band, there is a lot to enjoy. The joy of creating music is essential to their existence, the pleasure of playing together is almost palpable, whether in the more spiritual parts or the boppish ones.

The Nu Band’s first album from 2001 was called “Live At The Bop Shop”, as is this one. Let’s hope this does not finish the cycle.

Let’s leave the final word to Lou Grassi: “Mark’s brilliance and originality as a musician will live on through his music and through the many musicians who had the privilege of coming into his sphere and being encouraged, inspired and nurtured by him. As an artist he was original, uncompromising and totally committed to using his art to make the world a better place”.