Sampler / Sampled is Kerbaj’s third volume of solo trumpet music, following Brt Vrt Zrt Krt (Al Maslakh, 2005) and Trumpet Solo Vol.2.1 & Vol. 2.1 (Discrepant, 2019), but much more than solo trumpet music. It is a double album with two independent parts. the first album, Sampler, catalogs the restless sonic research that Kerbja had done with his trumpet – deconstructed its sounds, often literally, and reconstructed anew its sonic spectrum – in the last 25 years, including his very personal extended techniques. This album offers his highly innovative vocabulary – 318 different small pieces, ranging from one to 20 seconds long, all reflecting his wild imagination – sonic and much more. Some of these brief pieces sound as corresponding – again, literally – with the graphic art of Kerbaj and enjoy his unique, often sarcastic but most of the time a compassionate sense of humor. This album can be played in its original order or in a random mode and create a subversive sonic narrative. And obviously, this mass of samples may be used for applications like ringtones and cinematic sound effects.

Sampled suggests 13 abstractions of Kerbaj’s vocabulary. Kerbaj asked 13 musicians during the Covid-19 lockdowns to become co-composers and to build their own grammar with his sonic vocabulary and appropriate the sounds as their own. All are experimental sound artists and most of them are not associated with free jazz or free improvised music. Kerbaj had one rule: they have to use only Kerbaj’s catalog of sounds as their sound source (with the possibility to use all kinds of effects or treatment).

Fellow-trumpeter Nate Woolley, who wrote the liner notes, observed that one important output of this project is the challenge of the overused idea of ​​music as a universal language. This idea is very present in the so-called free improvised music where musicians from different origins can meet for the first time and make music together without the need to adapt to different musical traditions. Here, the collective part of creating music in real-time is not relevant at all. But the interpretations of Kerbaj’s sonic samples on Sampled suggest another kind of musical universality. They break boundaries of genres, often the most difficult ones to break, and stress a free and creative spirit. It is also a lesson about letting go of the very essence of Kerbaj’s musical identity and surrendering it completely to others. Kerbaj, in a typical manner, enjoyed some of these “fucked-up” interpretations and wrote to one of the musicians: “It’s great, I really don’t recognize any of the sounds at all.” 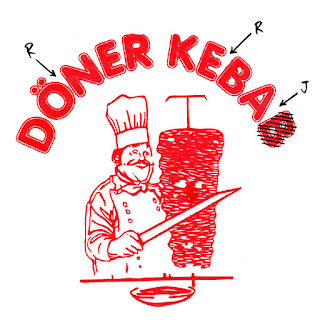 German trumpeter Axel Dörner and Kerbaj have been collaborating since 2005, in concerts, as a duo and in various other configurations. Their most known collaboration is with the short-lived Brass Quartet Ariha (with Austrian trumpeter Franz Hautzinger and German tubaist Carl Ludwig Hübsch. Recorded its only album in Beirut in 2013, released by Al Maslakh in 2015). Döner Kebab – a typical title for the Lebanese label Al Maslakh, a slaughterhouse in Arabic – is their first album as a duo, recorded at Studio Boerne in Berlin in February 2017. Dörner plays on the left channel and Kerbaj on the right one. Kerbaj also did the artwork and design.

Both Dörner and Kerbaj have developed their own, highly personal vocabularies of sounds and extended techniques. Therefore this spicy meeting often sounds like these musicians don’t play the trumpets at all and only employ electronic devices. Accordingly, the first acoustic piece “Döner” sounds like a friendly meeting of hyperactive and chatty aliens, who like to play and sculpt delicate streams of air, and apparently have an eccentric sense of humor. The following acoustic “Kebab” is even more radical and the trumpets of Dörner and Kerbaj speak closely in a cryptic lingo, quiet yet poetic one, comprised of a series of muted breaths and resonant, gurgling noises. Dörner and Kerbaj add electronics to their arsenal on the third and last piece “Ayran” (titled, like the previous pieces after popular Middle-Eastern food, this time the yogurt-based beverage), and their innovative dynamics sound now like they were working on a secretive, drone transmission from the restless aliens of the first piece, but punctuated with abrupt, cartoonish electronic noises.