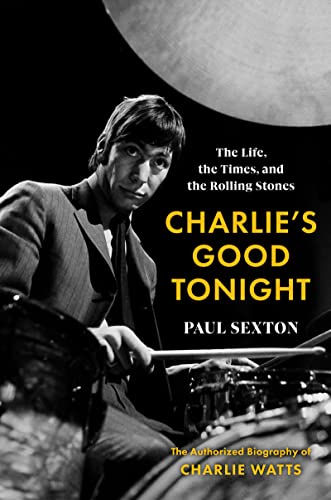 But the author’s roll tone is another great attribute of his writing in addition to its wonderfully rhythmic nature. Throughout these three-hundred thirty-some pages, Sexton’s affection for his subject is obvious, but it does not cloud his objectivity. On the contrary, his narrative is a clear reflection of his subject’s persona. The writer’s is a perspective that, in its own way, is as unique as Watts’s on stage with the Rolling Stones.

Perhaps not all that surprisingly, those family members and friends Sexton interviewed radiate much the same bemused and humble air as Watts himself. Their presence allows the author to make quick work of outlining childhood and early adolescence without ever succumbing to superficiality: by the time Charlie’s finally accepted the (multiple) invitation(s) to join

” data-original-title=”” title=””>Keith Richards‘ band, the stage has been set in as quietly a dramatic fashion as the drummer played.

Those two co-founders of the iconic band are authors of the pair of forwards to this book. Informal to a fault thought it may be, their writing aids in vividly depicting the musical world of the early Sixties in which they first encountered their longstanding comrade. Paul Sexton lends more scrupulous detail to his descriptions of the personalities and histories of the various members of that population, including, but hardly limited to, that famous peer of the Stones’s drummer, the irascible percussionist extraordinaire

Because the Stones have sagely nurtured their public profile over years, there’s no great suspense to the story this author tells. Plus which, the narrative proceeds at such a steady pace that it doesn’t gain discernible momentum. But as Sexton unveils the nuances of Charlie Watts as musician, artist, band mate and husband, he makes it difficult to put the book aside once its reading has begun. Sexton has all the charm of a master raconteur, so he captures the reader’s attention early and holds on to it without having to try too hard. Wiser still, he eschews any salacious overtones when discussing Watts’s rounds of indulgence in drink and drugs: we learn just enough to know he dealt with his failings with all the equanimity he displayed to the public when not sitting at his kit.

Paul Sexton is at his most astute as he weaves the history of ‘the greatest rock and roll band in the world’ in and out of the life story of Charlie Watts. That chronology is such an ideal backdrop, in fact, it becomes well-nigh impossible not to relish the tale when he turns to more mundane subjects like the man’s fondness for fine clothes; the contrast simply whets the appetite to learn more about Charlie Watts’s quirks as well as his life-long passions for jazz and art design, not to mention his own skill in drawing that begat a book devoted to jazz icon

Even in the later stages of The Life, The Times and The Rolling Stones, Paul Sexton refuses to allow his prose to exhibit any more ennui than his subject does in his golden years. Having become a participant in devising the mammoth stage production of the band’s mega-tours, Charlie Watts also keeps himself busy during downtime from the band: he guests with other musicians as gladly as he plays and records with his own groups. That is, when he’s not contentedly indulging the passions he shares with his wife Shirley, namely raising horses and dogs.

To that end, the descriptions of all these various and sundry activities match the array of photographs within The Authorized Biography of Charlie Watts. Vivid shots from childhood to later days, informal and posed, alone and with some of the colorful figures who populate the narrative, complement the copy in such a way the visual selection helps to provides a three-hundred sixty degree view of a well-rounded man who is ultimately the antithesis of a celebrity figure.

The depth of detail Paul Sexton sprinkles throughout Charlie’s Good Tonight actually fosters the perfectly down-to-earth, conversational manner of his verbiage. Even in the inevitable (?) discussion of Watts’ passing in ’21, there’s a logic to this succession of nine chapters that’s every bit as abiding as the tone of finality in the final one. By that time, there’s the sense that Paul Sexton’s covered it all. And, self-effacing as Charlie Watts was, he would no doubt approve of a conclusion to this book as dignified as that to which he brought to his own life and times.

All About Jazz has been a pillar of jazz since 1995, championing it as an art form and, more importantly, supporting the musicians who create it. Our enduring commitment has made “AAJ” one of the most culturally important websites of its kind, read by hundreds of thousands of fans, musicians and industry figures every month.

To expand our coverage even further and develop new means to foster jazz discovery and connectivity we need your help. You can become a sustaining member for a modest $20 and in return, we’ll immediately hide those pesky ads plus provide access to future articles for a full year. This winning combination will vastly improve your AAJ experience and allow us to vigorously build on the pioneering work we first started in 1995. So enjoy an ad-free AAJ experience and help us remain a positive beacon for jazz by making a donation today.