Stephen Gauci is a fiery and tireless Brooklyn-based saxophonist. Locally, he is likely most recognized as the curator and frequent performer in the Bushwick Improvised Music Series. Despite such activities, he is also a frequent traveler, touring across the US and Europe and cutting a few stellar live albums in the process. In this sense of scrappy DIY dedication, unrelenting performance calendar and widespread musical documentation, he is very much a product and pathbreaker of his times. He is so much so, in fact, that when Covid hit, he turned to his own label to stage and release an impressive series of 19 pandemic duets with the likes of Matthew Shipp, Kevin Shea, Wendy Eisenberg, Daniel Carter and others. Once restrictions began to loosen, he started to tour again, as well as record an apparent solo farewell to quarantine. A selection of these most recent recordings – live and in studio – are reviewed here. All are available as limited-edition CD’s and digital downloads.

This is an interesting one. Wendy Eisenberg has been carving out her space as one of the next generation of New York avant-garde over just the last few years. (Check out Nick Metzger’s review of her wonderfully trenchant solo guitar and banjo release

for just one recent example.) Francisco Mela is a percussionist of renown for his work in Latin and jazz circles, though, as Live at Scholes Street Studio shows, he has considerable free jazz chops as well. Often, he keeps a busy but non-linear rhythm in the back. Eisenberg and Gauci, meanwhile, pull the album into that arhythmic, (largely) amelodic, exploratory space that one has now come to expect from the two. Relentlessly dynamic and unpredictable, this fits comfortably into its scene. It is top caliber improvising. Eisenberg runs the gamut of guitar techniques, refusing to settle on a phrase or style for more than a few bars before detouring into new territory. Gauci, meanwhile, swings from more rapid-fire interlacing scales to the piercing upper registers in manner that falls somewhere between Ornette and Charles Gayle. Mela, meanwhile, is the welcome surprise. He offers just enough feverish bopish rhythm to keep the others form drifting off into atonal space but stops short of falling into anything too steady. Refreshingly contemporary, but also refreshingly downtown free jazz. 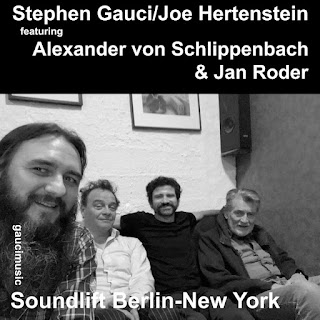 Soundlift Berlin-New York
was recorded in Berlin in October 2021, when things started to fall into some sort of manageable normality, if not necessarily the normal that existed before. (I know, I know. Some observation like that will apply to many releases reviewed on this blog over the coming months.) Gauci, of course, trudged on through the pandemic extensively exploring the duo and doubling down on his own practicing. As did, it seems, his companions on this release, drummer Joe Hertenstein, bassist Jan Roder, and pianist Alexander von Schlippenbach. This one starts slow and romantic, first with some brittle piano, soft drums and elastic bass lines. Then Gauci steps in with a few blusey blows, and the session shifts from there into angular, amelodic territory. Each musician gets some space to show off a bit, but the core of this collaboration is its balanced group play. The result sounds organic, as if this were a practiced, working unit rather than, in essence, the combination of two long-standing duos. I am not sure this will surprise anyone familiar with these musicians, but it certainly will hit home with them. 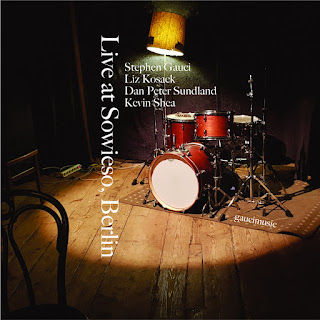 Live at Sowieso, Berlin
is another transatlantic collaboration, this time between pianist Liz Kosack, bassist Dan Peter Sundland, drummer Kevin Shea, and Gauci, that came together at the wonderful Berlin club Sowieso on October 23, 2021. Kosack, Shea and, of course, Gauci have been on my radar for some time. Sundland is an unknown entity to me, though a quick look at his bio and one spin of this recording indicating I have been missing out.

In short, this one runs hot. The first track sound like a bundle of energy trying to break out of whatever confines hold it. Longer, wilder runs give way to sections of choppier omnidirectional pulses which break into more extended full quartet pummeling. In this way, Live at Sowieso is similar to Soundlift Berlin-New York and I hear some Schlippenbach influence (or just a shared approach) in Kosack’s muscularity, classical sensibilities and boxy abstraction. Shea deploys a range of techniques most often intent on filling the air with as much fidgety clutter as he can. For his part, Sundland complements this well, laying into repeated pulsing single notes at times and running amok over the neck of the bass at others. I guess what I am trying to say is this has shed much of that distorted downtown influence on Live at Scholes Street in favor more Euro improv. (A notable exception comes through Gauci just before halfway into the third piece, but it is brief.) It has that sheer force and the unwillingness to strike a melody or steady groove for any amount of time. It has that restiveness. It also has the dynamics, which seems to be the driving force. Halfway through the first piece, the quartet goes quiet, then spends the rest of the piece in brief spasms, as if fighting to get back to that blast that commenced the set. The second piece picks up where the last left off but regains that initial energy quickly. At its eruptive peak, it reaches a blow-out of entangling but discrete threads, wherein the musicians are not struggling to be heard above the garble but are rising and together, each as a separate but essential component of the greater sonic whole. The third and fourth cuts are similar in range and jagged development, though the fourth is even more open and clattery than the rest, even if it retains that underlying energy that inaugurated the set. 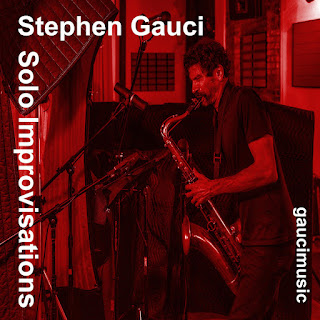 Solo Improvisations
was recorded in lockdown in 2020. It is inspired and introspective. And it is a short 29 minutes. Sometimes, that is just enough times, especially for a solo outing. Gauci says what he needs to in nine relatively terse cuts and then lays down his horn. The result is electric, whether jubilant or tortured or some instance sentiment in between. Much of this album focuses on the upper registers, periodically swinging down into torqued lower tone. Gauci goes down many a path with an inquisitiveness, energy and, when necessary, torqued melodicism that has distinguished him over his career. Notably, this release sounds a little more exposed than the others, as solo ventures tend to. Gauci plays as if he were compelled to embark on these solo explorations as a matter of coming to terms with the quarantine conditions. For Gauci, that pursuit unlocked new directions of exploration within his clunky, free-bop aesthetic. I am not sure where, exactly, this fits into his oeuvre, but it is certainly a fine addition and cap to his Covid era. Solid, riveting work, through and through.