Intended initially for his own practice, Lacy wrote three books of etudes, comprising six pieces each. He only recorded the first such collection, Book Hwritten in winter and fall of 1983 (released as “Hocus Pocus—Book ‘H’ of ‘Practiceers(Crépuscule, 1986)). In the late fall of that year he wrote Book W and then, in 1985-86, Book P. To date, this last book had only been recorded by the Belgian-based violinist Mikhail Bezverkhny (“Cross Purposes” (2022)).

It so happens that two saxophonists, Josh Sinton and Jon Raskin, independently ventured to take on the challenge of performing Lacy’s études, and by coincidence without duplicating, with as a result that we have all three books now available, of course in the rendition of two other saxophonists. Sinton takes on Book H on baritone, and Raskin Books P and Wthe former on baritone too, the latter on alto, which is by itself already strange, considering the works were written for soprano.

For once I will the artist review the album.

Sinton says: “Steve said that each piece was a ‘portrait’ of somebody to whom he owed a debt of gratitude for their inspiration. I spent several years trying to hold a musical image of these people in my mind as I played each piece, but that didn’t seem to get me anywhere. The pieces still sounded inert.”

What seemed to “crack the code” of these etudes was the element Lacy always advocated for: time. Sinton says, “I spent a lot of time just playing the pieces. When I moved to NYC I used them as busking material in the subways, I used them as warmup material and I tried playing them as duos with saxophonists, drummers, all sorts of musicians. I made a couple of stabs at recording them. I would take several months off and then come back to them. I played them and then I played them again. I tried to approach them the way Steve said he approached music, as a materialist. And somehow, I found versions I could live with.”

I began working on these pieces in 2002 while attending the New England Conservatory and performed one of them (“Hustles”) at a recital. Steve helped me as much as he dared that year. He wasn’t sure if they were performed on the baritone saxophone, but after hearing my initial attempts he gave it his blessing. I’ve been whittling away ever since. Twenty years of the same little phrases played over and over and over again. In 2021 I decided to force myself to record them so I could move on to other vistas. At this point in my life and in my relationship to these 6 compositions, “mastery” is neither the point nor a consideration. Only point-of-view and relationship-to-the-materials are.”

It is bizarre to have a review with so much text by the artist, but I think Sinton gives great insights in the music of Lacy, which helps us understand the effort he put in this album too. This is not a quickly recorded solo album by someone who happens to be in lockdown.

Let me add some more text by Sinton about Lacy, this time from the book “Steve Lacy (Unfinished)Sinton’s article on Lacy is much longer, but I selected these excerpts because they are also relevant for this album. 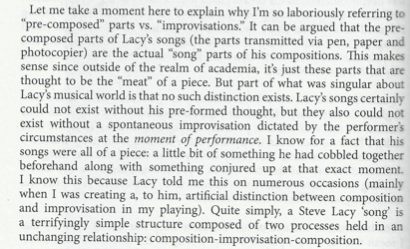 This explains amongst others why tracks are dedicated to for instance Karl Wallenda (a circus artist), or Harry Houdini, the magician, next to musicians such as Sonny Stitt and Nicolo Paganini.

It is telling that Sinton mentions Peter Sellers, the actor, as an example, because he gets his tribute on Whoops in Book W. 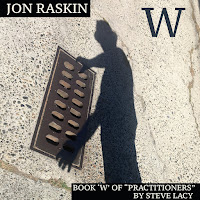 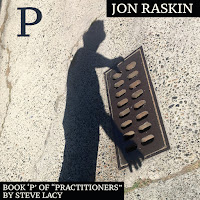 As a member of the ROVA Saxophone Quartet (with Larry Ochs, Bruce Ackley and Steve Adams), his own quartet and other ensembles, Jon Raskin needs no further introduction, apart from the fact that

On “Book“, Raskin’s uses his baritone to play the études. His mastery is more than just managing to play the pieces, by itself already a feat because of their complexity and repetitiveness-with-minor-changes, but by the calm and self-assured way he makes them his own, enjoying the playing, and literally dancing with Lacy’s compositions.

On “Book W“, he uses his alto to perform the six pieces. These are indeed exercises, like working up and down scales on”Willy Niles“, and never meant to be anything else than practice for Lacy’s own soprano. The music has the same kind of austerity of Bach partitas: one naked instrument exploring form, going through endless repetitions that alter, turn, switch and expand. It becomes mesmerising for both player and listener.Despite the rigorous nature of the core compositions, they leave the performer the opportunity to work with them, rather than just blindly play them, and Raskin’s long time experience as an improvisor gives these exercises the necessary dose of human warmth and pleasure to make it a real treat.

Needless to say that I’m quite enthusiastic about all three albums. They are not only great tributes to the music of Lacy, but also wonderful saxophone albums in their own right, delivered by two artists who fully master their instrument and have made a strong personal investment in bring us Lacy’s music with a deep respect for the material , even if they ad their own individual angle and voice.