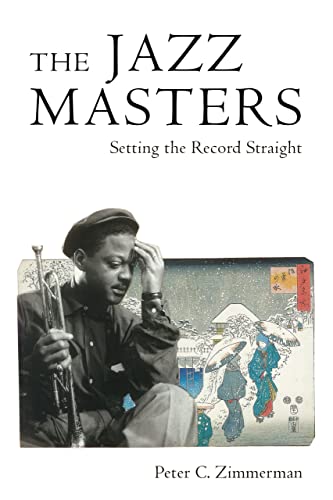 There us nothing quite like an interview for immediacy and intimacy. While some people are willing to talk endlessly about themselves, you sometimes find they have nothing to say. Then there are those who say little but turn out to be intriguing. Those, you want to interview. Of course, they may be reticent. So, a good interviewer asks the right questions and can establish a rapport with his or her subject. It is not easy. If it were, we would have a lot more books like this one. And would know a lot more about what makes working jazz musicians—and not just stars—tick, although stars abound in these interviews.

Peter Zimmerman’s title, The Jazz Masters. Setting the Record Straight., is a bit of a spoiler. And a bit of misdirection too. For the past forty years, the National Endowment for the Arts Jazz Master/> “is the highest honor that our nation bestows on jazz artists…a select number of living legends who have made exceptional contributions to the advancement of jazz.” For example, in 2022, the recipients were

” data-original-title=”” title=””>Cassandra Wilson. The program has included not only instrumentalists and singers, but also writers, producers, club owners and, gulp, even the occasional critic.

” data-original-title=”” title=””>Sonny Rollins, who is very well represented in this collection, was a recipient in 1983, almost in the beginning. Not everyone on the list is a household name, but then again, neither is everyone interviewed in this collection. So, in a way, the title is an example of the inevitable subjectivity and backroom politicking that go into all such rolls of honor. Why “a” and not “z”? While The Jazz Masters is subtitled “Setting the Record Straight,” it is never clear if subjectivity and politics are part of the record that need to be set straight. It is a small matter. For the most part, the interviews, twenty-one in all, plus a tribute to

” data-original-title=”” title=””>Cedar Walton, make for interesting and even compelling reading. Would anyone really dispute the presence of Sonny Rollins, whom Francis Davis once called the greatest improviser in the world, or

Who you find interesting, or revealing, or thoughtful or not is going to depend mostly on your expectations, interests, and personal experiences. I have no idea what those would be. Some of the fascinating moments came from hearing someone, in this case,

” data-original-title=”” title=””>Bob Cranshaw, discuss his conception of the role of the bass in the rhythm section, and of his own self-conception, not as a leader, but as a follower. Or pardon my ignorance, learning about

” data-original-title=”” title=””>Bobby Porcellihearing him playing something other than Latin jazz, and discovering his playing on a recording, New Stories. Hope is in the Air (Origin Records, 1998), that left me wondering how I could have ever missed it, since it was reviewed extensively. The interview with

” data-original-title=”” title=””>Dick Hyman is something of a classic, with Hyman gently pressing on us (and not just interviewer Zimmerman) the need to let labels go and just listen to the music. For sure, we have all heard that before, but for the most part, we love our pigeonholes, if only to make decisions about whom or what to listen to when there is so much music around. Some egos seem to obtrude, but in a business in which so many strive for so little recognition and where so few get it, that is to be expected. You or I would be happy to have

” data-original-title=”” title=””>Art Blakey appear on our resume. And we would probably want people to know that too, as

Just to give you a better idea of ​​the contents, here are the interviews: (as they appear):

” data-original-title=”” title=””>Yusef Lateef. You can read from cover to cover; browse; or dip in and out: there’s no correct way to approach an anthology this diverse. An “RIP 2012-2021” gives a poignant reminder of how many players we have lost in the last decade (and to COVID) alone. There is an attractive section of photos; a helpful, if brief, discography; and an onomastic index.

As it seems to be the general rule in this series, the editing, and production are of a very high order. You may be tempted to thank the University of Mississippi Press for putting its resources into this distinctively American art form. We do have You Tube, but it occurs to a student of the music that at some future date, the Press might consider issuing these volumes with accompanying downloads, which copyright issues apart (substantial, obviously) is now a way of making such a series almost indispensable for students at all levels.

You can read about music and musicians, but nothing beats hearing them, or for that matter, going out to see them when you can. Maybe better times are, indeed, ahead. Whatever the case, this is a basic collection, and well worth the read.