” data-original-title=”” title=””>Teemu Kekkonen indeed does cross a lot of both “heres” and “theres” during the course of Here/There. His debut has one foot in his native Finland’s folk roots and one in the most urbane of metropolitan clubs. It could instead refer to jazz’s past and present, as it channels the class of

” data-original-title=”” title=””>Esbjorn Svensson (the pianist’s CV includes some time in an actual rock band on top of work in cinema and academia). Then again, the mix also has room for catchy grooves, classical sophistication, noisy wailing, and the odd breezy springtime romp, so any binary comparison quickly falls apart anyway. The session has too many shades to reduce to such simple descriptions anyway. The trio is as adaptable as the leader’s omnivorous mind demands, equally comfortable dashing off chamber pieces or touches of blues and gospel on the way to something fun and funky. If there’s one constant, it’s their willingness to go anywhere. 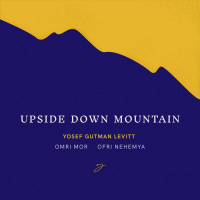 Upside Down Mountain Contains a world of colors and emotions for something resolutely pure and simple in structure.

” data-original-title=”” title=””>Yosef Gutman Levitt‘s music is a quietly eclectic kind that lets straightforward and floaty melodies speak for themselves. It spins together folky and jazzy elements from everywhere he’s been (born in South Africa, migrated to New York City and eventually Jerusalem), spun into a set eminently charming and compiling.

Gutman’s choice of acoustic bass guitar helps set a distinct tone right from the folky plucing that eases into the opener, making the trio format sound familiar and yet different from the more common jazz combo with upright bass. Likewise, his pieces feel homey and comfortable no matter how many different worldly traditions they touch on. He and

” data-original-title=”” title=””>Omri Mor‘s piano float through sunny meditations and down-to-earth grooves overflowing with quiet warmth; There’s something deeply spiritual running through it all, while the pieces easily transcend any themes based in specific religions or traditions. This music is many things, but above all simply human. 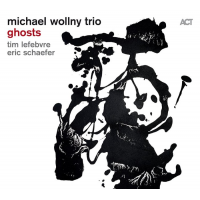 It’s common (and even accurate) enough to say that songs are living things. If that’s true, it only stands for reason that they eventually have their own ghosts—not that they actually stop “living” in that metaphorical sense, but because of the echoes they can leave behind in the minds of others. That, at least, is

” data-original-title=”” title=””>Michael Wallny‘s theme for this fairly dark outing. “As an improviser,” he explains, “you often find that it’s not the compositions themselves you’re playing, but your own memories of them.” These are pieces that he frequently recalls and revisits, presented with a deliberate Gothic flair that keeps everything slightly (or sometimes more than slightly) unsettling.

Wollny being Wollny, he also gives each piece a fundamental makeover, though still usually leaving the shape at least partly recognizable. Fans of the band Japan might still have to squint to spot the title track’s melody amongst the clouds of haunting arco bass, for instance, while Gershwin’s “I Loves You Porgy” becomes practically spooky with a dose of macabre drama. The album is not without spots of playfulness (the warmth of “She Moved Through the Fair” still comes through this trepidatious reading), balanced out with other moments of churning and roiling that verge on fearsome. Whatever the treatment, the pieces are kept in weird flux like actual ghosts, hovering between possible worlds and never feeling quite resolved.

Tracks: I Loves You Porgy; Willow’s Song; Hauntology; Hand of God; Ghosts; Monsters Never Breathe; Erlkönig; In a Sentimental Mood; She Moved Through the Fair; Beat the Drum Slowly.

All About Jazz has been a champion of jazz since 1995, supporting it as an art form and, more importantly, supporting the musicians who create it. Our enduring commitment has made “AAJ” one of the most culturally important websites of its kind, read by hundreds of thousands of fans, musicians and industry figures every month.