” data-original-title=”” title=””>Catherine Russell prefers to engage her art using older formats. On Send For Me, Russell infuses her performances with a certain New Orleans-cum-Chicago flavor, circa 1930. She does not do this as a gimmick, rather it is the style in which she best works. Of the material on Send For Me, Russell states that she, …”loves romance that swings.” The musical hinge joining the 1930s with the ’40s provides her an able vehicle. Consider the NOLA clarinet and ensemble brass on “Did I Remember,” or the Chicago jive of “At The Swing Cats Ball.” These songs are best presented this way, not for eliciting nostalgia, but because of a closer-than-skin connotation that the period of composition provided the pieces. Russell’s song choice is solidly weighted, the most “standard” standard being Brooks Bowman’s “East of the Sun (and West of the Moon)” which is dispatched with a certain New York City flair. Russell continues to create living considerations of her repertoire that compel and delight.

Key Selection: “Did I Remember” 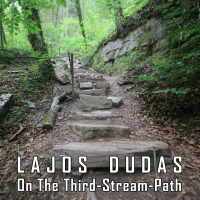 Lajos Dudas continues to claim that each release is his last. The 81-year-old clarinetist released The Lake And The Music (Jazz Sick) in 2020, sure this was the last. Happily it was not and Dudas presently provides On The Third-Stream-Path, which gingerly tests the narrow edge between classical and jazz, a delineation all but erased in the twenty-first century. The ten pieces presented reflects the variety of Dudas’ interests. “There Is No Doubt” recalls

” data-original-title=”” title=””>Jimmy Giuffre‘s early 1960s trio recordings but it is the jazz exception here as the remainder of the disc is classically conceptual. “Valse Pour Clarienette Solo” and “Ballet Music For Clarinet & Piano (in 4 sets)” could be traced all the way to Carl Maria von Weber by way of

” data-original-title=”” title=””>Tony Scott. Dudas’ tone remains viral and robust on this collection of clarinet pieces presented in disparate formats, in each which he excels.

Key Selection: “There Is No Doubt” 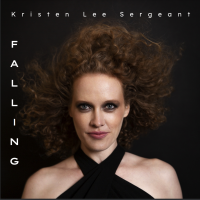 ” data-original-title=”” title=””>Kristen Lee Sergeant fashions a concept recording with Falling, intended to capture the challenge of current events and an artistic answer in addressing that challenge. She frames the anxiety of our current period in her rapid changes in tempo and time, particularly in the songs “Let’s Fall” and “Birdsong.” The hard feelings and anger are experienced in the sharp corners and edges of “Sisyphus” and “Infinity Blues,” the latter being the masterpiece of the recording. Sergeant’s theme invention toggles from tactile to visual on the aptly named ” Chiaroscuro” where the singer studies circumstances in terms of light and shadow. A superb craftsman, Sergeant deftly interpolated two standards: “That Old Black Magic” and “Autumn Nocturne” into her tone tapestry.

” data-original-title=”” title=””>Ted Nash is on soprano saxophone. The performance is solid and definitive; arrangements considered carefully and executed. 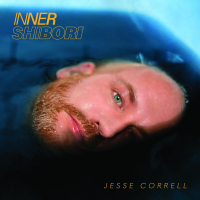 ” data-original-title=”” title=””>Jesse Correll is a complete media event. Berklee graduate, podcaster, occasional recording artist, Correll catches fire with his first release since 2015’s Held Momentarily (Self Produced) and fourth since 1996. Correll makes a smart brand of popular music that is hipply contemporary while carrying on a tradition established with

” data-original-title=”” title=””>Frank Sinatra and his brand of pop. The quality of the music, its exceptional production, and Correll’s obvious talent coalesce in Inner Shibori: the singer’s tacit response to a recent moribund relationship. Correll’s lyric writing and composing are sharply defined and exciting as evidenced by “Hope Like Adrenalin” (“When my heaviness and depression still my heart, I’ll use hope like adrenalin till my arrested heart beats in time…”) and the sinewy, guitar-driven, hook-infested “Worst of Both Worlds.” Correll is using Inner Shibori as his professional (re)introduction. As it turns out, he has been here all along. 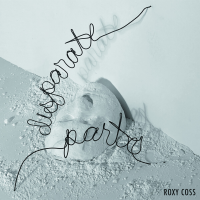 Following an exploratory release in her 2011 aponymously named debut, saxophonist Roxy Coss evolved into a strong hard bop showing on 2016’s Restless Idealism (Origin, 2016). She consolidated her approach with Chasing The Unicorn (Positone, 2017), before coming into her own with the uniformly fine Quintet (Outside In Music, 2019). Coss returns with her quintet on Disparate Parts, extending her compositional experience into an integrated suite and creating an emerging soundscape that is fresh and precise. Interspersed among five takes of Coss’ composition “February” is a four-part suite that demonstrates Coss’ growth as a composer and performer. Her quintet has sharpened its edge also. The suite section: “Part I: The Body” illustrates this evolution into juggernaut ready to permanently rearrange what once was known as hard bop: an immediate show-stopper that swings…hard. 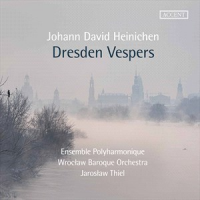 Johann David Heinichen (1683—1729), was a contemporary of Bach and Handel, if not so long lived. His pastor father, Michael Heinichen, studied music at St. Thomas School at the St. Thomas Church in Leipzig, where Bach enjoyed his final appointment in 1723. Heinichen was most noted for his orchestral and opera composing while part of the court of Augustus II the Strong in Dresden, but also composed much sacred music from which Dresden Vespers derives. Specifically, the music presented celebrates the Feast of St. Francis Xavier with Litany and Vespers on December 3rd. After a period of little listening interest, Heinichen’s music was resurrected by Musica Antiqua Köln under Reinhard Goebel’s in the early 1990s with recordings of the composer’s Dresden Concerti (Arkhiv, 2008). Here, the vocal Ensemble Polyharmonique with the Wroclaw Baroque Orchestra, picks up the Heinichen flag. Providing crisply defined period instrument readings of the “Dixit Dominus,” “Laudate” and “Magnificat” composed for the saint’s day. Dresden Vespers is a pleasurable Baroque listening experience. 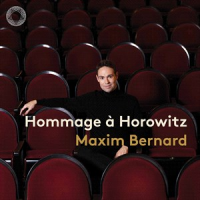 Maxim Bernard’s Hommage à Horowitz initiates in classical music the practice in rock music of contemporary bands recreating, in toto, classic rock albums from earlier times (eg Phish’s “Musical Costumes” performed on Halloween night, see Halloween 2010, Atlantic City, NJ: Little Feat -Waiting For Columbus (Self Produced, 2010)). Bernard’s subject is pianist Vladimir Horowitz, and more specifically Horowitz’s 1986 performance captured on Horowitz in Moscow (Deutsche Grammophon). Bernard recorded his recital live in the concert hall of the Domaine Forget de Charlevoix in Québec, Canada, January 2017, where he includes the two Scarlatti sonatas (K. 87 and K. 135) inexplicably left off the Horowitz’s original (and not since restored on the original). Bernard makes no effort to imitate Horowitz, rather he performs with an exuberance betraying his fondness for Horowitz, celebrating the older pianist and his repertoire and concert programming. Horowitz encompassed all from Scarlatti to Rachmaninoff. Bernard beholds this with his arms open wide. 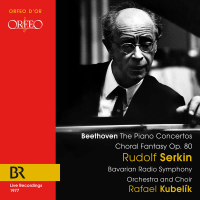 Two lions of the ’50s and ’60s met up in the late ’70s Munich, recording Beethoven’s orchestral piano corpus with the Bavarian Radio Symphony Orchestra and Choir. The five piano concertos and Choral Fantasy are well represented in the catalog when not even considering cycles recorded before 1970. What makes Rudolf Serkin and Rafael Kubelík so special to warrant attention nearly 50 years after the fact? Both men were dedicated Beethovians and these performances occurred late in each man’s life where their performance experience was nearly complete. The German locale of Munich is notable for its significant love of the subject and performers. Their interpretations hold up extremely well when compared to the same repertoire by Leif Ove Andsnes and Till Fellner. Kubelík elicits a compelling tension between discipline and abandonment while Serkin easily conforms to his surroundings. Welcome is the performance of the Choral Fantasy where pianist and conductor reach solid likemindedness and direction. The sonics are exceptionally captured and reengineered. 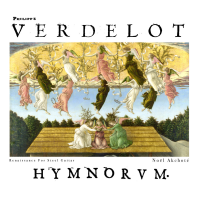 While not a household word, Noël Akchoté is a well respected French guitarist who has performed with a wide range of musicians including

” data-original-title=”” title=””>Marc Ribot. His beautifully idiosyncratic style functions to illuminate the interior of pieces he performs. He has made an industry of recording Medieval and Renaissance music on the guitar, steel-body guitar, and dobro. Akchoté has an impressive reach, addressing an broad array of music most recently represented by his readings of the compositions of Philippe Verdelot (ca 1485—ca 1530). Verdelot, of whom little history is known, is considered the father of the madrigal. On the present recording, Akchoté focuses on a collection of sacred hymns not well represented in the recorded literature. The guitarist’s style is at once thorny and circumscribed, ragged and plush. Akchoté has no fear of the abstract or impressionistic. On Verdelot’s Hymns, he eschews the abstruse for a throaty and resonant clarity readily accessible and enjoyable. Akchoté is a light and sound that must be liberated from under the bushel and shared with all. 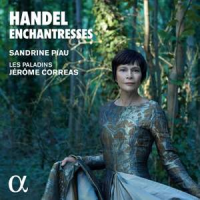 If Joyce Didonato may be considered the contemporary Handel mezzo soprano, then Sandrine Piau is surely the contemporary Handel soprano. Piau has recorded some 25 Handel-related albums and her creamy-tart voice, splendidly dense in the midrange, is well suited to Handel’s more athletic material while still capable of producing a tactile tenderness and tonal caress. Indeed, Piau summons considerable pathos on “Ah! Mio cor!” from Alcina while emitting sparks, on ” Desterò dall’empia Dite” from Amadigi Di Gaulo. Piau closes her recital with a Hanel favorite, “Lascia Ch’io pianga” from Rinaldo, solidly framed by her frequent collaborating orchestra, Les Paladins, under the direction of Jérôme Correas. The singer and band have a warm and empathic relationship that translates well in recording.