One day, during the earlier part of the pandemic (time is vague, 2020 – 2022 really kind of mush together), I watched a live stream of saxophonist Rodrigo Amado performing a solo show from his home in Lisbon. It was, I believe, the first public performance of his solo repertoire and it already had very many the elements that make his first official solo release, Refraction Sol, such a captivating piece of music: the robust tone, the embrace of the jazz vernacular, and the effortless reworking of it. The effect then, as well as on Refraction Solo, was a solo performance that wove tradition and a unique voice together for a tour-de-force of a show.

Solo Refraction was recorded at a performance at the Church of The Holy Ghost (Igreja do Espírito Santo) in Caldas da Rainha (Portugal) in early July 2021. The sound is wonderful and clear, there is some natural reverb from the church and one can hear each Breathe and click of the key as naturally as if they were sitting in the first pew. The concert begins with the piece ‘Sweet Freedom,’ the name of the song, writes Amado in his notes to the work, is an amalgamation of Sonny Rollins’ Freedom Suite and Joe McPhee’s Sweet Freedom, Now What. Indeed, during the song, strands of the Rollin’s classic ‘St. Thomas’ can be heard from time to time, though rarely as a complete quote. Instead, Amado takes parts of the tune, a note, an interval, a stanza, and lets it lead him in different directions. The performance is exhilarating and representative, it gives the listener a touch point, not a head or predictable form, but some landmarks, and for Amado, it is a deliberate exploration of the music and musicians who were among his original inspirations.

Perhaps too, the song title ‘Sweet Freedom’ could as well be in reference to the context in which the music was developed. During the pandemic, Amado, like many musicians, spent hours alone practicing. To keep his routines interesting, he began to deliberately focus on certain musicians and musical elements. As Stuart Broomer writes in the liner notes, for Amado,

The lockdown meant focusing on a different kind of dialogue, a conversation with the tenor saxophone legacy and his own roots. That focus invokes two strongly linked figures, Coleman Hawkins and Sonny Rollins, the first great explorers of solo saxophone and both profoundly involved in protest and issues of identity.

Towards the end of ‘Sweet Freedom,’ Amado plays the ‘St. Thomas’ theme in full, followed by a rapidly building set of runs, gaining both in velocity and density. It seems almost like a release, like coming to end of a journey, stronger from the challenge of confronting both the instrument’s legacy as well as one’s own, and at the very end, coming to a peaceful resolution.

The next piece, ‘A Singular Blow’, is shorter (the first is 21 minutes, this one eight) and begins with a slightly lighter touch. However, soon the lithe melody suddenly slows, the notes are elongated and the timing feels somewhat stretched. The final piece, a coda of sorts, is the short ‘Shadow Waltz,’ which begins with an engaging see-sawing melody in a strict waltz time. From this rhythmic base, Amado inserts variations and refractions of his own.

Amado took the time afforded to him during the pandemic and found a new way to express his musical ideas and refine his language. The resulting Refraction Sol is accessible and warm, and as Amado is building on both the classic sound of his instrument and the musical legacy of the inventors of Jazz’s language, he finds his place in it. 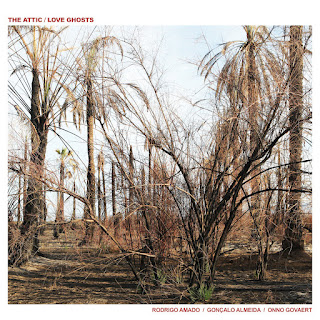 Love Ghosts is Amado’s The Attic’s third release. The music is a hard hitting sax, drum, and bass trio. This ‘piano-less’ format is a popular one, especially for musicians who want to free themselves from the harmonic constraints of chordal instruments. The Attic’s music however, is not strictly about freedom from a harmony, one can almost hear the chords here, but rather, it seems like a deliberate choice to build on the space between the instruments that it affords.

Along with bassist Gonçalo Almeida and drummer Onno Govaert, Amado leads the group through a hard-hitting set of improvisations that often revolve around a classic sounding theme he introduces. The opening track ‘New Tone,’ after a exploratory introduction from Almeida and Govaert, Amado begins with one of the aforementioned riffs, after a few repeats, it starts feeling timeless. The improvisation that evolves from it is gentle at first, we hear Amado’s full-bodied tone deliberate manipulations of the theme, then Almeida’s playing soon morphs into a propulsive walking line, and Govaert nudges the music, adding extra tension and momentum. Half-way through the first track, the group is at a different place, up-tempo but very much in control, Amado starts to overblow notes to add emphasis, Govaert adds a splash of intensity with his cymbals, and Almeida’s phrasing keeps the pace up, filling up the space. The track ends though with space reasserting itself. The drums drop out and the sax and bass engage in a duet that puts the melodic statements into even starker light.

As the music continues, ‘Encounter’ has a similar vibe, beginning with spacious playing and then filling in with a roiling rhythmic layer along with Amado’s ever evolving melodic lines. At one point, Amado and Govaert drop out, giving Almeida a big hole to fill. It is on the title track, however, that the groups power is really exhibited. The track begins in exploratory mode: Govaert and Almeida providing tonal textures and Amado adding slightly overblown legato notes. When the tempo begins to solidify, the mood is set, paving the way for a slow building tension that reaches a peak of ‘out’ playing beginning about half-way through the explosive 16-minute track. All of the space is squeezed out by the end. ‘Outer Fields,’ the closer, begins with the suspense of Almeida’s bass playing in the middle of the spacious silence. Govaert joins after several minutes and a moment later Amado joins with a somber melody. The starkness of track is alleviated towards as the improvisation continues, Amado’s lines thicker and flowing, ably supported by the bass and drums.

The starkness of the trio is its superpower and the space between the instruments and their potent weapon. The possibilities of the Attic feel immense, always something new to explore and room for more.