The Blue Notes’ fiery kwela-flavored jazz lit up the British scene. But its upbeat vibe commingled with sadness about separation from family, friends and roots back in South Africa. Becoming refugees took a heavy toll on the musicians. Only Louis Moholo-Moholo, who is still with us, lived to see the fall of apartheid.

In late May 2022, three months into the war in Ukraine, the plight of refugees is at the front of our minds. Around five million Ukrainians have become refugees and another seven million are displaced persons inside their own country. The apartheid-era South African refugee crisis was not on this scale. The number of internally displaced persons was, however, massive: between 1960 and 1994 an estimated three and a half million black South Africans were forced to resettle in the so-called “homelands,” where they were given a degree of sham independence (and starved of state funds).

Not surprisingly, many South African musicians, mostly black but some white, became refugees. Among them were the six members of the Blue Notes: five black musicians—alto saxophonist

” data-original-title=”” title=””>Louis Moholo-Moholo—and the white pianist ” data-original-title=”” title=””>Chris McGregor. Racially diverse bands were effectively illegal in apartheid South Africa and in 1964, after two years of incessant police harassment, the Blue Notes became voluntary exiles—refugees—following their appearance at the Antibes Jazz Festival in France. After a few months’ peripatetic existence in mainland Europe, the band settled in London, except for Moyake, who decided to return home.

The Blue Notes’ fiery brand of kwela-flavored jazz lit up the British scene. But its defiantly upbeat vibe flourished alongside sadness about separation from family, friends and roots back in South Africa. Apartheid and exile took a heavy toll on the musicians. Moyake passed in 1969 aged 35. Feza passed in 1975 aged 30. Dyani passed in 1986 aged 40. Pukwana and McGregor both passed in 1990, aged 51 and 53, respectively. Only Moholo-Moholo, who is still with us, lived to see the fall of apartheid.

The two albums discussed here—the 2 x CD Blue Notes For Mongezi and the single disc Blue Notes For Johnny—are extended reissues of tributes the surviving Blue Notes recorded on the passing of Feza and of Dyani. 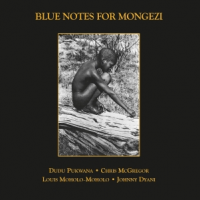 Blue Notes For Mongezi was recorded by Pukwana, McGregor, Dyani and Moholo-Moholo on 23 December 1975, just passed over a week after Feza. The quartet had gathered that day to attend his public memorial service. The recording was made in a rehearsal studio on a reel-to-reel tape recorder with, it sounds like, one or perhaps two microphones; The session was, in effect, the band’s private memorial service. The audio is far from hi-fi but the two-and-a-half-hours of music, all of it spontaneously created with no verbal cues passing between the musicians, transcends the recording’s technical limitations and is profoundly moving.

The context is laid out in a prose poem of McGregor’s which is included on one of the inner sleeves. McGregor’s words pay tribute to Feza’s artist, to the friendship between the band members and, not it overlooked, the gravity of the collective decision to go into exile which they made before setting out for Antibes in 1964. Wrote McGregor: …” So together we went to the home of his parents, As he came with us to our parents’ homes, To make our farewells, So that together we might go into the world, And do the things we knew we must do…” It must have been a heart-wrenching decision to make. Most of the assembled parents and siblings never saw the Blue Notes again. Feza, the youngest member of the band, had just turned nineteen.

Blue Notes For Mongezi is divided into four movements, divisions dictated by the need to change tape reels rather than by the structure of the music. The first three movements are eruptive, by turns celebratory and grieving. They are in the main abstract (the Blue Notes were versed both in township jazz and free improv). The fourth movement, which takes up the final thirty minutes of the second disc, has relatively conventional form. It roughly divides itself into two parts: a descending kwela-based four-bar motif around which the quartet coalesce, followed by a more reflective second section in which final farewells are made.

A true Afrikan wake, an act of collective catharsis, Blue Notes For Mongezi is not an easy listen. But it will reward the close attention of those who loved the Blue Notes and their music. 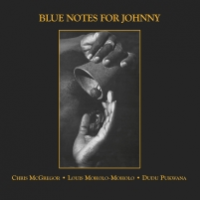 Blue Notes For Johnny is a different sort of wake. It was recorded by Pukwana, McGregor and Moholo-Moholo ten months after Dyani passed. The three surviving Blue Notes had had time to come to terms with their loss and their performances are not as raw as those on Blue Notes For Mongezi. The album was also recorded in a professional recording studio rather than a rehearsal room, so the audio is better. Most significantly, perhaps, the six tracks, though rich in improvisation, are based on existing compositions. Three were written by Dyani, three by the other band members, weaving in traditional South African tunes. This reissue also includes three high-grade alternate takes, two of them of Dyani’s stirring album opener, “Funk Dem Dudu.”

It is fitting that these reissues were prefaced earlier in 2022 by two others—Blue Notes: Legacy and Blue Notes In Concert (both also on Ogun and previously reviewed here). Fitting, because the portents suggest that South Africa, while not exactly the new London, is shaping up nicely to become another geo-cultural crucible for the reforging of jazz. Prominent among the auguries is the founding of the Blue Note label’s imprint Blue Note Africa, which launched in mid May 2022 with pianist

” data-original-title=”” title=””>Nduduzo Makhathini‘s highly recommended In The Spirit Of Ntu. In July 2022 this will be followed by drummer