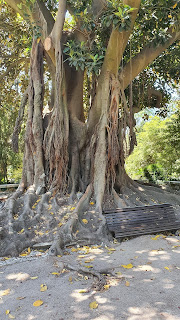 Heading south east on Av. Alvares Cabral, a mere kilometer over a hill from the Reservatório da Mãe d’Água das Amoreiras (see part 3), is another neighborhood park, the Guerra Junqueiro Garden. It’s similar to the other park with plenty of wonderful old trees, like the giant Ficus macrophylla behind the bandstand and that has an old bench sinking into its enormous root system. There is also a small pond, waterfall, cactus garden, and multiple cafes. It also turned out that the first Sunday, which it just happened to be, there is a crafts fair. In fact, crafts-folks were setting up alongside one of the many walking paths and a quick glance at the first couple of stands left a good impression. A seller who builds small boxes featuring vintage comic book characters, explained that the market only accepts vendors who make their own products – everything handmade – ever drawings, photograph, article of clothing, bar of soap, jewelry and the like. It was a nice discovery for an early Sunday morning.
In previous years, I have described the Gulbenkian Foundation’s impressive mid-century modern gardens (see here, for example) but not their first class art museums. There are in fact two, one for modern art (which is currently undergoing a multi-year renovation), and the main Gulbenkian building which holds the classics, a collection that spans an impressive range of work from ancient Egypt, the Islamic world, Asia and Europe. A visit to the collection takes time as there is simply so much to take in, beginning with Egyptian pieces, to the impressive Islamic carpets and tiles, to the Rembrandt paintings, up through the Art Nouveau jewelry of René Lalique. Additionally, an excellent temporary exhibition is currently displaying a selection of the work of the haunted Armenian born abstract artist Arshile Gorky alongside the contemporary work of Lisbon painter Jorge Queiroz. The artist curated exhibition (by Queiros) explores connections and similarities between the works, and it serves as a good introduction to both artists.

These were two very different art experiences, one crafts that you can touch, hold, and buy, and the other, priceless works that you can marvel at, both enjoyable.

In the small auditorium, behind the drum kit, sat New York based drummer Chris Corsano, whose career spans the rock and free improvisation and includes work with saxophonist Paul Flathery, the band Harry Pussy (with his partner tonight, Billl Orcutt) as well as Bjork. To his right sat guitarist Bill Orcutt, of Harry Pussy fame and collaborator to folks such as Peter Brotzmann and Loren Mazzacane Connors.

Orcutt’s set up was a Telecaster directly connected to a Fender amp, no pedals, no electronics, and the sound from the guitar was like a fresh breeze. Orcutt began with some jangling notes followed by an array of Americana-flavored riffs, rife with dissonance. Corsano played expertly along with the intense folk-like lines coming from his partner, together building a rich tapestry of pulse and texture. For the second tune, Orcutt dropped the capo and strummed an open and somewhat warbly chord, at first basking in the reverb and then rapidly strumming, from time to time allowing single notes to pop out from the wash of chords. Corsano, a supportive and guiding collaborator, helped bring the churning riffs to a boiling point. By the third song, they went immediately for the jugular with a tough piece made from overdriven shards of sound. Then, they dialed back the energy and Orcutt played some open, twangy chords, sounding a bit like an overheating John Fahey.

Orcutt’s use of the naked guitar and amp brought to mind the idea of ​​a secret guitar festival inside the main festival. We had heard the feedback driven work of Tashi Dorji (See #2), the electric psychedelia of Jorge Nuno (Voltaic Trio), the rich stylistic pallet of Ava Mendoza, the acoustic drive of Marcelo dos Reis (with the Turquoise Trio), the contrasting styles of André Fernandes and Pedro Branco (in Joao Lencastre’s Communion), Susan Alcorn’s pedal steel and the explosive Julien Desprez (with Seven Storey Mountain), and still to come, the dizzying fretwork of Julian Lage. What a cross section of styles, and for a guitar fan, a real treat. If one were to ask Jazz em Agosto’s artistic director Rui Neves if this was on purpose, his reply would likely come wrapped with a sly smile, neither completely confirming nor denying. So, even if not purposeful, it was a delightful accident.

“It’s really good to be here,” said the trio’s bassist Stephan Crump before the trio began their bequiling set, “one reason is that it is one of the most beautiful places on the planet, and another is that I can be here playing with Eric McPherson on drums and Kris Davis on piano.”

The generous ensuing set from the Borderlands Trio in the outdoor amphitheater, was, judging by the enthusiastic response of the audience, a fest-goer favorite. To pinpoint a standout from the standout, Crump, with his exquisite bass work and who, aside from taking on the role of the MC, also seemed to be more than one-third of the band on stage this evening.

The music began with a soft, slightly askew introduction from Davis. Crump and McPherson hit on the off-beats, or maybe there were no real beats at all, just a gentle breath. A slow accumulation of sound followed, Davis locking into a questioning pattern of chords, McPherson upping the pulsations and Crump’s bowing, building the base of sound. Davis’ simple chord progression held the center while Crump stretched the tempos elastically. McPherson’s touch was light but driving, as he held the tempo steady with even-handed mix of straight ahead grooves and coloring outside the lines.

Crump’s first solo did not go for virtuosity (at first), but rather texture. He played a slowly devolving line until picking up the bow and diving deep into an emotional solo. Davis began by adding light accompaniment. Picking up on something, Crump found the right notes between the piano’s, and played light glissandos over the fretboard. McPherson, who had stepped away from the drums, came back and began to ratchet up the energy.

The set cascaded through sections of prepared piano (which Davis prepared as the other two played) and which caused the acoustic piano to sound almost like a synthesizer, to a long passage that sounded like a classic piano trio, and finally, to a drum solo in which McPherson methodically explored each of the instruments in his kit. The final moments of the performance found the trio escalating the intensity to a more than satisfactory end. Their short encore was like the whole set in miniature, with the trio building from scratch to another tasteful groove.

Pianist Matt Mitchell and bassoonist Sara Schoenbeck musical careers and interests straddle many worlds. Mitchell’s collaboration with Tim Berne’s music is bordering on legendary and Schoenbeck has taken her classical instrument into new and unusual territory with Anthony Braxton’s 12+1(tet) and the Tri-Centric Orchestra, the Gravitas Quartet with Wayne Horvitz, and beyond.

Their duo set in the small auditorium was contemporary classical nature, with many delicate moments, fragile and beautiful in their austerity and quirkiness. A highlight of the set was multi-part suite, written by Mitchell, which featured some very compelling piano work. The last song they played was the most accessible, cinematic in sound and scope, with Schoenbeck playing a distinct melody that flowed through Mitchell’s undulating chords. Overall, the music seemed to be constructed from tenuous connections and parallel play that came together only to drift apart again.

Back on the outdoor stage, John Zorn’s New Masada Quartet played the closing show of the festival. John Zorn on sax, Julian Lage on guitar, Kenny Wollesen on drums, and tonight, Trevor Dunn on bass, sounded looser and more charged than ever. Perhaps it had something to do with the last minute substitution of bass players (Dunn for Jorge Roeder), or perhaps it is something to do with Zorn’s relationship with Jazz em Agosto (he had a special edition of the festival dedicated to his music in 2018) but Whatever it was, even the ever cool guitarist seemed stirred up.

They hit with full force, Wollesen kicked things off with a fast tempo and Zorn erupted quickly into a full throated squall. Then, after a sudden and brief pause, the group launched into a tune with a distinct Ornette Coleman like melodic hook. Throughout the set, Zorn directed the band through hand gestures given between his own playing, imbuing the set with something both visually as well as musically exciting. Lage was particularly fierce. Coming in after a quick drum break, his solo was angular and punchy, his typical mind-bending fluid lines becoming darting fists.

Lage kicked off the second tune with a sweeping arpeggio and over the rustle of drum and the thrust of the bass, Zorn played a forlorn, yearning melody. Dunn and Lage then introduced a vamp over a straight forward beat over which Zorn played arching scales and dynamic figures. The band picked up the pulse and moved to on top of the beat and reached a peak of energy that carried them to the next tune. Here, Dunn pulled off a magnificent solo, wrenching brilliance from his fingerboard. Wollesen too gave an urgent performance as Lage and Zorn seem to be colluding to the side of the stage.

The New Masada Quartet offers a new take on the beloved book of Masada and in this closing concert, the quartet took these new interpretations to a higher level. The tune’s heads are familiar to fans of the various Masada bands, and even if one wasn’t known, the tunes are so infectious that they instantly feel familiar. It would have been pretty difficult to find a disappointed listener in the audience.