Let us start back at the park, the Amoreiras Garden / Marcelino Mesquita Garden, like many of the small neighborhood parks in Lisbon, the park has several playgrounds for kids, gravel paths to saunter on and a small cafe. Typically reasonably priced and stocked with an assortment of drinks and pastries, like the ubiquitous and delicious pastel de nata (cream cup), these cafes make for a perfect stop during long city walks. 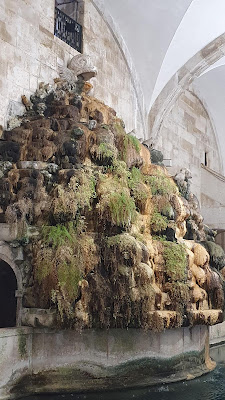 This park though has the Reservatório da Mãe d’Água das Amoreirasthe last built piece of the ambitious and fantastic Águas Livres Aqueduct (see part 2), put in place in 1746. When it was finally finished, church bells ran in celebration of the stately indoor reservoir, which was built not only for its utility but to also be a beautiful, serene space, like a church , with marble columns rising from the deep blue waters and an intake pipe from the aqueduct featuring a dolphin’s head. Overhead, there is a viewing platform with nice views of the downtown and surrounding neighborhoods. This is part of the Museu de Aguawhich pops up at important parts of the antique waterworks and for a few euros lets you in to this fantastic monument, when it’s open… the building is so unique that there are themed light shows that take place in the afternoons.

Around the corner, on an other side of the park is another treat, ready for you after your third or fourth pastel de nata of the day, the Árpád Szenes-Vieira da Silva Foundation which houses a small, exquisitely curated museum dedicated to the 20th century abstract artists, Lisbon born Maria Helena Vieira da Silva and Hungarian born Arpad Szenes. In fact, if you took the subway to the Rato stop, you would have already seen a work by Vieira da Silva on one end and Szenes on the other.

Their story and art is interwoven in the history of the 20th century. The pair had met in France while studying art and after a while married, both losing their respective citizenships in the process. They lived in Brazil during the second world war and upon return, applied for and denied Portuguese citizenship and therefore settled in France, where they were accepted. In the final years of Vieira da Silva’s life, a foundation for her and her husband’s work was created in Lisbon and a museum was built in a former silk factory on the edge of the park. Vieira da Silva had the chance to select which pictures to show, but never saw the completion of the museum. A new digital component has also been recently added, which animates aspects of her paintings, inviting the viewers to engage with the art in new ways. Set to a unique soundtrack, many such digital projects are often rather dull or miss the point of the art entirely. In this case, quite the opposite is true.

There seems to be ever more to discover in Lisbon, however, for now, we go back to the Gulbenkian gardens where more music awaits us.

It was noticeably cooler out, a breeze rustled the leaves around the stage as Ava Mendoza walked out on the stage. Alone with her six string, she looked like a post punk gunslinger, ready to show us what she’s got. Greeting the audience, she said it was her third time at Jazz em Agosto, strummed a chord and let loose a run of notes with a particularly spaghetti western twang.

Strikingly, her introduction was the most ‘traditional’ use of the guitar so far at the festival. Not ‘traditional’ in terms of jazz or any specific style of playing, but rather how she was playing the instrument: a strum, picked notes, a melodic impulse, a grunge rock riff, a mix of chords and melody. Her tone was overdriven but clear, she played a few big, open chords, manipulated some pedals to create a drone and used ample reverb to thicken the sound.

Mendoza is a storyteller at heart. After veering a bit from her original impulse, she went back down the path of Morricone-like melodies, tripping dissonance-bombs along the path. Reaching a peak, she dropped the distortion and played a clear set of chords, a breath of fresh air after a long slog through the chapparal. Then, she began a progressive rock inspired chapter, namely the middle point of the classic story arc in which the hero has accepted their mission and sets off to fight the good fight. With a set of real-time loops, she launched into a soaring solo, building a rock-ribbed musical fortress of air around the amphitheater. For a final piece, the resolution part, Mendoza showed her singer/songwriter side. Signing over an open tuned blues based riff, her voice slightly husky with a slight no wave affect.

As the festival continued though, one could sense subtle connections between the groups. Some of these connections are overt, like the festival’s theme “Chicago, New York, Lisbon,” and some much less so, . These connections need not be precise, but they do not feel accidental. Case in point, Lisbon based drummer João Lencastre’s Communion – a project whose intertwining musical connections to Mendoza’s set were as ephemeral as they were crystal clear.

The eight piece group came quickly to the stage, two saxophonists, two guitarists, two bassists (one on electronics as well), one pianist, and last but not least, the drummer, composer and leader, Lencastre. Electronic blips, textural drumming, and the tinkling of the piano introduced the group, then a thick riff from the electric bass thrusted it forward. The power of the octet could be felt like a seismic rumble under the accessible, legato melodies. One could think of it in context of the Miles Davis classic In a Silent Way but with much more underlying pressure.

During the set, agitated, ear-worm worthy melodies crashed into block chords from the piano and prominent stick work. High energy solos from saxophonist Ricardo Toscano and Albert Cirera often played off tensions with the rhythm section. Likewie, Pedro Branco on his new Flying-V guitar, was a mass of uncontained energy, shooting off distorted lightening bolts, while André Fernandes, with a more reserved semi-hollow body, began with a jazz inflected solos only to end up in Crazy Horse territory. One couldn’t be blamed for hearing as much Radiohead and Muse in the music as they did jazz, Lencastre’s compositions are as wide-ranging as his listening habits. The final piece, ‘Unlimited Dreams,’ is striking in its subconscious allusions to Ornette Coleman’s ‘Lonely Woman’ in the opening melody, setting up a very effective contrast to the jazz-rock explosion in the middle of the piece. At one point, the drummer could be even be heard ecstatically letting out a shout over the mounting energy of the group.

The combination of modern rock and modern jazz and the solo guitar set that proceeded it were certainly quite different; However, they both played off stylistic forms, uncompromisingly used the language of rock without eschewing other musical sensibilities, and delved into electronic and effected textures without sublimating the sounds of the instruments. In some sense, they both offered a version of a future of jazz with root tendrils connecting to the past.

In the darkened Gulbenkian auditorium, the opening show was a mind-boggling feat of musical telepathy. Sensitive and reactive, the Lisbon based duo of Pedro Carneiro on marimba and Rodrigo Pinheiro on piano was uncannily precise and note perfect; However, there was no music to follow, no notation to read, everything was unspoken and unplanned.

It was not jazz, but unlike the other days where the overarching musical approach leaned in the direction of rock or even noise, the duo turned towards classical as their starting point. Pinheiro (whose work with the RED Trio is well documented on the Free Jazz Blog) along with Carneiro develop intimate motives with flowing energy and ripe melodic invention. Pinheiro’s ideas seemed to pour forth in concise statements that were complimented and refactored by the marimbist. The pianist sometimes lingered in a certain register, often on the lower side, adding the occasional higher pitched accents, or was very dynamic and covered the whole keyboard, but no matter how he proceeded, each improvisation unfolded like a complete song.

The development of each whimsical miniature was not driven by only one of the musicians, rather the songs formed through the continual interplay, interlocking parallel ideas. The second piece began with a gentle melody, the marimba sounding delicate, almost brittle, and then answered with percussive energy the open ended statements in the pianist’s melody. A later piece began with Carneiro using an unusual mallet, with four evenly spaced heads on each, to create a focused and evocative pattern that Pinheiro absorbed and built on. The music, dynamically and unbelievably precise, was a real high note to the start of the evening.

New York trumpeter Nate Wooley’s Seven Storey Mountain is a multi-faceted work based on the 1948 autobiography from the American monk and author Thomas Merton. The current version, number six, is a large scale work that combines an 11 piece band comprised of three guitarists (including Susan Alcorn’s pedal steel), two keyboards, two violins, and Woolley’s trumpet along with, this evening, members of the Gulbenkian choir (with direction from Wooley’s collaborator Megan Schubert). The setting in the grand indoor auditorium lent an even more impressive air to the concert, starting with the group rising from below the stage and taking to their respective instruments on the risers. Then, without warning, an unseen choir began singing a wordless hymn from the balcony and the curtains behind the musicians began to slowly open, revealing the beautifully lit lush gardens behind the floor to ceiling panoramic windows. The feeling was quite ‘holy’.

The musicians on stage entered via the unique vibrations of the pedal steel guitar, a perfect segue between the haunting hidden choir and the group on stage. Next, the three percussionists added a light textural layer and the outlines of the hymn-like chord structures were outlined by Alcorn. The gentle harmonic melody began to flow from the keyboards.

Unconnected to the music – perhaps? – a woman could be seen walking past the windows in the closed gardens. As she disappeared from view to the right, a set of official looking flashlights appeared through the leaves on the left. They seemed to follow the walker’s path. Though it was impossible to know what was happening, it did provide an unexpected visual component. Now, back to the music.

It was French guitarist Julien Desprez who first broke through the slow moving heft of the music. His eruptive passage seemly surprisingly loud and disruptive. Like the unexpected scene outside behind the stage, one wondered if he was meant to be this way, so voluminous and cacophonous. Soon the squelching began to not only raise the tension, but also fit in. A sound of desperation, even terror, began mounting in the group. Then a wall of sound followed as the three percussionists began pounding at their sets, Ava Mendoza on the other guitar began screaming along with Desprez. The violins added additional color the group’s epic wail, while the two keyboards kept an even center of gravity. The group reached an unbelievable intense climax and then they stopped, only the piano’s continuing on. The choir re-entered, this time with words, singing parts of “Reclaim the Night” by Peggy Seeger, a song about sexual violence and rape. Following the intense music, the words were affecting and powerful.

The audience filtered out of the sold out auditorium quietly, visceral impacted by the performance.

One more installment of Jazz em Agosto 2022 will appear this week. In the meantime, if you haven’t already, check out part 1 and part 2.