German experimental guitarist and luthier Hans Reichel (1949-2011) invented in the mid-eighties of the daxophone, a single wooden blade – the tongue, not longer than 330 mm and no wider than 30 mm and no deeper than 5 mm – attached to a tripod and connected to contact microphone(s) and played with a small wooden block – the dax, a term derived from the German word Dachs, meaning “badger” and referencing the many animals sounds that the daxophone is capable of generating – and stroked or rubbed with a bow, mostly a double bass bow. The stroke of the bow causes the tongue to vibrate and produce an infinite range of voice-like timbre, depending on the shape of the tongue and the type of wood. 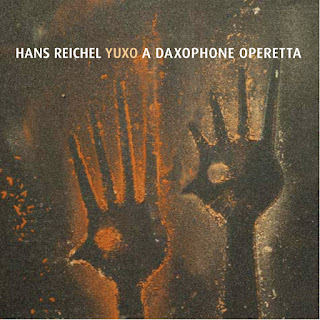 Reichel released his first solo daxophone album in 1992, Shanghaied On Tor Road: The World’s 1st Operetta Performed on Nothing but the Daxophone
(FMP), but assumed at that time that the “little toy” had to prove something, that it is not a gimmick, and it could properly function in multi-voiced structures, like a band, or a choir. Ten years later, when he released Yuxo: A New Daxophone Operetta (FMP), he already knew that a lot of people have seen and listened to the daxophone since – and learned that the ‘d’ is not at all a misprinted ‘s’. “There was no need to prove something anymore: the daxophone comes by as if it was the most natural thing of the world.”

Yuxo is the last major project of Reichel, composed, played, recorded and produced by Reichel between December 2000 to February 2002 (with one piece dated to March 1994) in Berlin and Reichel’s home in Wuppertal (yes, a neighbor of Peter Kowald and Peter Brötzmann ), and re-released by Reichel’s disciple, Japanese pioneering guitarist Kazuhisa Uchihashi, who inherited Reichel’s collection of Daxophones. The inspiration for this project began when Reichel was commissioned in late 2001 to compose and record some daxophone music for a new production of the Comedy of Errors by William Shakespeare, directed by Martin Duncan nd performed at the Maxim Gorki Theater in Berlin throughout the first half of 2001. Few pieces emerged from the musical material of this project, sometimes just as a theme, a little sketch or an entire song that was refined and put into a new ambiance.

Yuxo is a brilliant dadaist operetta. It still sounds fresh, highly inventive and highly playful. Reichel was clearly inspired by the cartoonish, slapstick kind of humor employed in Shakespeare’s comedy, but spiced it with his own subversive humor and love for doo-wop vocals and joyful, sensual chaos. He created a group of eccentric and talkative characters, each with his own set of very emotional, human-like vocal qualities, all sound as having tons of fun, and insisted on relaying this kind of sly fun to the innocent listeners. 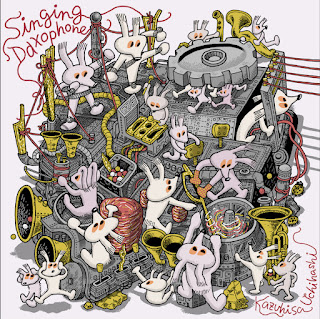 Uchihashi is known from the Japanese alternative-free-improving band Altered States as well as his collaboration with Otomo Yoshihide’s Ground Zero and Tatsuya Yoshida’s Ruins, and his continuous collaborations with innovative musicians from all over the globe. He collaborated with Reichel for the first duo of daxophone in 1990 (Stop Complaining/SundownFMP, 1991) and for their second duo in 2006)King Pawns: Live in Berlin 2006,
Innocent, 2012), Uchihashi released his debut daxophone album, Talking Daxophone, five years ago (Innocent, 2017).

Singing Daxophone It is dedicated to “great composers” of jazz standards, partisan anthems, soul, rhythm n’ blues, pop and metal iconic gems, where all the vocals and the instrumental parts are arranged for a choir of daxophones. Uchihashi recorded the 13 songs between 2019 and 2021. Uchihashi adapts the amused pathos and eccentric spirit of Reichel’s operetta characters (just check the beautiful cover illustration by Tetsu Kayama) and plays and twists the vocalists’ roles. David Bowie’s dramatic “Space Oddity” is charged into a meeting with curious, alien pixies. Lou Reed’s “Walk on the Wild Side” receives a surprising, breezy, country-ish aroma. Queen’s “Killer Queen” and Bob Marley’s “No Woman No Cry” sound like they were hijacked by harmonica crooner Larry Adler. Robert Plant in Led Zeppelin’s “Black Dog” dances the two steps. The Beatles’ “Eleanor Rigby” gets a dadaist twist and Simon & Garfunkel’s “Scarborough Fair” now suggests that it was all about some horror fair. The Italian partisan anthem “Bella Ciao” has already surrendered to countless versions, and Uchihashi keeps its innocent passion. There is no better way to close this hopeful statement about the daxophone with “What a Wonderful World”, with this little toy respecting the iconic, heartfelt vocals of Louis Armstrong.