Cellist Guilherme Rodrigues, from Lisbon, has been living in Berlin for six years, developing musical partnerships with musicians across intersecting scenes. His simultaneous roles find him a part of Lisbon’s Creative Sources Recordings record label, musical director of Berlin’s Hosek Contemporary Art Gallery, and member of the Berlin based Reanimation Orchestra, among many other activities.

Recently, Rodriques took the time to answer some questions about his work and experience in Berlin:

FJB: Is there something material – like demographics, affordability, or cultural practices – about Berlin that you think makes such a scene possible?

Well, Berlin is currently the artistic epicentre of the world, where almost every musician and artist stops off, even if only temporarily, to experience, discover, gain experience and artistic culture. The cultural practice is that, almost every night there are concerts, exhibitions, cultural actions happening in the city.

In what ways do you think the scene has changed since your involvement and what might have caused these changes?

Since I got involved I think the scene has become richer on all levels (laughs)!!!
In the 6 years I’ve been here, only in the last two years I’ve felt a drop in desire, much because of the pandemic.

In what ways has the scene changed you and your musical practice?

Berlin is very important to me. I learned and continue to learn a lot. I have met idols from my childhood, who I have listened to at home since I was a child “because” of my father. Today, I am colleague of many of them and I absorb a lot from each shared experience, not only musically. I am today a richer musician thanks to this city.

Are there any recordings, labels, venues, musicians, or other participants you would like to shout out for cultivating the scene, or that you feel are essential to it? And/or is there a recording of you or your work that you feel is particularly representative of your work in Berlin?

FMP was a label with determinant importance in what concerns the promotion and development of improvised music. Regarding venues, maybe Ausland is the one with more visibility since ever. But nowadays there’s more. Important musicians for me I can mention of course Alexander von Schlippenbach and Sven-Ake Johansson who came from the beginning and are still active.

Two albums of mine that I think it represents my work here are: “The Treasures Are” – duo with Harri Sjõstrõm, and “Laura” – sextet with Tristan Honsinger, Axel Dõrner, Ernesto Rodrigues, Mia Dyberg and Pierre Borel.

What is it about the Berlin scene that is different from Lisbon’s?

Lisbon in the last 10 years has grown a lot in terms of the number of musicians and also of the audience. Still, it seems to me that in Berlin the musical quality is higher. There are more musicians from the first generations of improvisation that enrich the scene a lot, also because Berlin it’s bigger, it’s a multiracial city, and it’s in the center of Europe.

A few years ago now – I’m a bit embarrassed to admit, but admit I will – a CD showed up called The Treasures Are that paired cellist Guilherme Rodrigues with woodwindist Harri Sjostrom, who was a part of Cecil Taylor’s quintet in the 1990s (recently documented with
Lifting the Bandstand
from Fundacja Słuchaj.) For some reason the CD stayed nearby on the desk, along with short note still packed to my pin board, and even though the music was long ago loaded into my smartphone, I simply had not written about it. Now is as good as a time as any to rectify this situation!

Above, Rodrigues mentions this particular recording as being representative of his work in Berlin, and for good reason. It is an intimate recording that captures the moment compositions are being made. There are no solos or look-at-me moments, rather one hears the exquisite push and pull of musical actions and reactions resulting in miniature compositions.

To grab a couple tracks as examples: ‘Treasures 1’ begin with the quick swipe of the bow across the cellos higher register and then trickling lines from the soprano sax. It’s over quickly, just a minute to establish the atmosphere. The next ‘Treasure II’ starts with some overblown saxophone tones and deeper, longer tones from the cello, coalescing into a near tandem passage. ‘Treasures III’ is a different, both musicians offering dense squalls of sound. ‘Treasures V’ is a longer track, at 5 minutes it offers a classical like start, with both musicians engaged in a pointed dance and evolving into a lovely reflective piece. Then, ‘Treasures VI’, at 3 and 1/2 minutes, features the two playing with different aspects of their respective instruments, Rodrigues plucking like a bass, Sjostrom shaping the air through the instrument until settling into some middle eastern-like scales. Each miniature contains unique characteristics, making the The Treasures Are quite rewarding to the attentive listener. 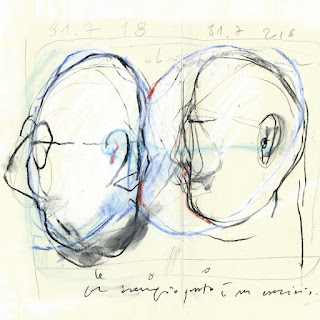 Recorded in Berlin, but with the Munich based Italian trombonist Sebi Tramontana, Han Jiea is another fine duo collaboration from Rodrigues. What drew me to this recording was in fact the duo setting, this time between the cello and the trombone, an instrument that also has the ability to expressively slide between tones and timbers.

The duo begins with a demonstration of that expressiveness on “I”. A burst of tone and a slide, the cellist then follows Tramontana’s advances up and down the octaves. Rodrigues’ bowed lines and percussive hits on his strings provides intriguing counterpoint to Tramontana’s melodic ideas. “II” begins with plucing on the lower strings and a muted exclamation from the trombone. The two build in intensity, the cello’s registering, the horn’s wail turning into tighter rhythmic figures. “III” grows a little more demanding, with extended techniques creeping in on the cello’s side and feverish exploits and metallic human cries from the other. The other tracks continue on this expressive route, using air, embouchure, bowing and plucking to create a captivating world of music.