About a year ago Swiss drummer and composer Florian Arbenz released the first of his planned dozen “Conversations” recordings.
Conversations #1 with Brazilian guitarist Nelson Veras and American trumpeter Hermon Mehari. Arbenz’s CV features tours with Greg Osby & Dave Liebman, and a duo recording with Osby from a little while back. Veras is a versatile guitarist with roots in Brazil and experience living and working in Europe, his own resume mentions work with Osby, Lee Konitz, and Tomasz Stanko, among others. Finally, Mehari is a music educator and performer, whose experience includes working with Hubert Laws, Randy Brecker, and Tony Tixier.

By looking at the names dropped, you may be tempted to be thinking along mainstream modern jazz lines, and you would not be wrong. Conversations #1 opens with ‘Boarding the Beast’, a syncopated guitar and drum duet kicks it off introducing a lithe, up-tempo melodic tune. The guitar work is delicate feel but assured, and when Mehari comes in, he is laser focused and poignant. Veras then takes an extended solo. Embracing fractured phrases and start and stop melodic ideas, its short but lively life-span is captivating. Moving to the next one, ‘Let’s Try This Again’, sees Mehari in the lead, playing a hopeful, though melancholic, melody over Veras’ sweeping arpeggios. Arbenz is nearly absent from a splash of cymbals or some gentle stick-work below Mehari’s arcing lines, until the track picks up with a rolling rhythm and a melody that feels instantly recognizable.

Throughout, the rhythmic connection between the three musicians is a highlight. ‘Groove A’, for example, works with a harmonic and groove (for a lack of a better word) that lurches alluringly and seems to inspire playingful ideas from the trumpeter. However, now to contradict myself, ‘Vibing with Morton’ barely has a pulse – which in this case is a good thing – Mehari’s mournful melody is the backbone of the track, while Arbenz adds restraint atmospheric percussion. The variety of the tracks is also an alluring aspect of the recoding, as the pace picks up quickly on the following track. Overall, a set of nicely composed songs and a nicely sequenced album helps frame the conversation of these three thoughtful and accomplished musicians. 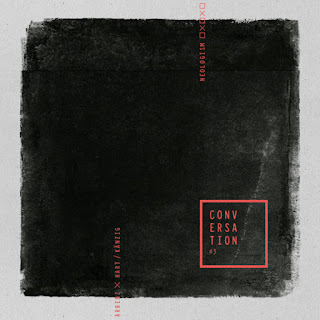 Following the strength of the melodically and harmonically rich
Conversations #1, what direction would Arbenz take in the next release? It seems a focus on rhythm was on his mind as the next release in the series was a double recording:
Conversations #2 pairs Arbenz with UK based vibraphonist and drummer Jim Hart, and Conversations #3 adds, in addition, Swiss bassist Heiri Känzig.

The opening track of #2 sets the bar high. ‘Triptych’ begins with a demonstration of beauty of the vibraphone – ringing, overlapping chordal fragments sprinkled with sumptuous overtones, it’s a aural delicacy. However, the vibraphone is a mallet instrument and each tones in imbued with percussive qualities, which is then delicately amplified by Arbenz’s drumming. Picking up on Hart’s pulse, Arbenz adds an invigorating element. ‘Wooden Lines’, the next track, is an early show stopper. Hart’s moves to marimba accentuates the percussiveness of the track and his dry, wooden melodic notes get pushed along by Arbenz’s straight forward approach. ‘Freedom Jazz Dance,’ the Eddie Harris tune, which also appeared on
Conversations #1, has a deconstructed minimalist arrangement. The version that closed Conversations #1 Focused on the melody spread between trumpet and guitar, whereas here the it is naturally on the rhythmic aspects. The vibraphone takes the tunes head in a more fragmented way and Arbenz uses a restricted number of percussive elements quite creatively. It is a neat exercise to place the two takes next to each other.

Conversations #3 with Känzig begins with ‘Ramprasad,’ and finds the bass and vibraphone in duet for the first minute. Arbenz then joins, underscoring the melody that the two were playing. As the track progresses, the value of Känzig’s contribution becomes clear, as he adds a bottom end that is not present on the other two recordings. The next track solidifies this impression, ‘Jammin’ in the Children’s Corner’ starts with an up-tempo introduction that sports occasional intersections between the vibraphone’s melodic line and the bass’s groove. It is infectiously good. Arbenz takes a short rolling solo, followed by an excursion from the vibraphone that carried along by Känzig. The follow up, ‘Ode to The Sentimental Knowledge’ is a more serious affair, the ballad begins with an evocative melody intertwined with a lyrical bass line, and over time, the trio builds confidently to a resonant peak. The album closes with Thelonious Monk’s elliptical ‘Epistrophy’, whose rhythmic displacements and hypnotic lead line is a perfect fit for this group. 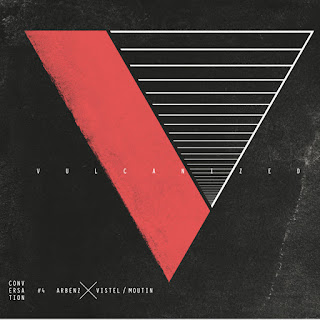 Conversations #4 is a more ‘traditional’ trio setting – joining the Arbenz here is Cuban saxophonist Maikel Vistel and French bassist François Moutin. In one sense, they pick up where the last recording ended, with a take on a Monk classic, this time it’s ‘Bemsha Swing.’ The treatment is fairly conventional, but that is not meant to take anything away from it – it is excellent. Vistel is fierce, his solo is fiery; Arbenz is precise, each syncopated beat giving the song a special lilt; and Moutin seems to know exactly how much is needed to give an extra bump of energy without overpowering.

The Monk track is not a one-off. The trio also pulls of a fast moving paced of ‘Hackensack’ featuring Moutin and Arbez tastefully duetting in an extended introduction and then the bassist with a plucky solo. In addition to originals like ‘Pandemia’, the trio arranges ‘Scarlet Woman’ from Joe Zawinul, ‘Waltz for Debbie’ by Bill Evans, and again visits ‘Freedom Jazz Dance.’ This time, the version seems to recall the rock-influenced arrangements that Miles Davis explored on l967’s Miles Smilesalthough Vistel’s energetic and upbeat solo offers a bit of contrast to that album’s seminal version.

So far an excellent exploration of musical partnerships. An obvious question is what will Conversations #5 bring?