The story has already been told a few times: when Peter Brötzmann belatedly celebrated his 80th birthday with a concert weekend at Café Ada in his hometown of Wuppertal, he invited many of the usual suspects who have accompanied him throughout his musical life – Hamid Drake, Full Blast, Mats Gustafsson (to name just the most prominent). However, one name on the list was completely unknown to almost everyone in the audience: Camille Émaille. What was even more surprising was the fact that she was introduced with a percussion solo set. When she entered the stage, some people in the audience (mainly a bit aged and male) were relatively unimpressed and had no intention of interrupting their conversations. But after 30 seconds at the latest, most people’s jaws literally dropped. Émaille set off an incredible firework of ideas, unheard even in the world of free improvisation. At the end of her 25-minute performance, there were standing ovations. She was definitely the (shooting) star of the festival.

Émaille was born in 1993 in Nice and studied at the Musik-Akademie of Basel (Switzerland) with Christian Dierstein on contemporary music and with Fred Frith on free improvisation. She received a bachelor degree in percussion with excellence in 2018. In 2016 she was a guest scholar at Mills College and studied there with William Winant, Fred Frith and Roscoe Mitchell. In 2017, she released her first solo album on the Portuguese label Creatives Sources. Recently, Èmaille has worked with many artists from varying fields, such as video and muppet theater, and she has played in lots of musical projects like Oxke Fixu (a duo with Xavière Fertin on clarinet), Ghoast (a duo with American saxophonist Tom Weeks ), ESCARGOT (her quintet with Timothée Quost on trumpet, Xavière Fertin on clarinet, Louis Frères on e-bass and Tom Malmendier on drums) and in a trio with Hans-Peter Hiby (saxes) and Fred Lonberg-Holm (cello). When she’s on tour she travels in her own van, because she only uses her own drum and percussion set, she doesn’t use sets that are provided to her. 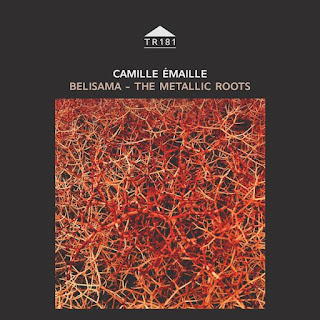 If you’ve ever seen Camille Émaille’s percussion set, you’ve surely noticed the many metal elements. On her new album Belisama – The Metallic Roots she concentrates only on these instruments like gongs, cowbells, glockenspiels, agogôs, metal blocks, and many more for 53 minutes. Even if she is not the first or only percussionist to use such so-called extended materials, a radical focus on them is at least rare. In doing so, Émaille’s closeness to new classical music becomes obvious on Belisama, often the tones are produced by shaking or scratching and scraping sounds, the “instrument” is rarely hit. In such a consistency this opens up an unheard sonic universe, the 53 minutes just fly by. Émaille’s talent for building tension also contributes to this. Once the listener has made himself comfortable in the sound space, he is torn out of it again by an unforeseen element and steered in another direction almost out of the blue. Belisama begins meditatively with long gong intervals that are not quite in time. After five minutes, a sort of drone joins in. This intro lasts seven minutes before another instrument appears. Slightly modified, the last three minutes take up this idea again, the rhythmic and tonal figure booksends the improvisation. In between, Émaille explores a smorgasbord of sonic possibilities like a curious child: her percussion set rattles, squeaks, clatters, hisses, clangs echoes, reverberates, scrapes. Here and there acoustic effects are deliberately used, they sound like electronic processing.

Belisama is a radical experiment, Émaille throws herself back to her origins. In the lines notes she says that she’s “going back to (…) my home, inside myself”.

Fascinating, new, and adventurous in the best sense.

If you want the CD, you might write her an e-mail.

Listen to an excerpt here: 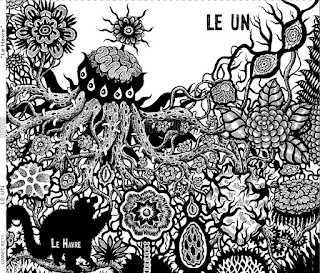 Camille Émaille is an outstanding solo performer but she’s also a great team player. Her duo album with Tom Weeks is excellent and at a concert I was lucky enough to see on their Germany tour in September she was the driving force in a trio with Hans Peter Hiby and Fred Lonberg-Holm. What is more, even in a 26-people large ensemble like Le UN her individual voice stands out in the improvisation.

Le UN is an unusual orchestra anyway. Musically located somewhere between the chamber music philosophy of King Übü Örchestru and the expressive approach of the London Jazz Composers Orchestra, it develops a unique sonic and improvisational power. The current version of the band was initiated by bassist David Chiesa in 2019 and the members self-conception is to act as an improvisation society. Apart from Émaille musicians like Sophie Agnel on piano and Michel Doneda on soprano saxophone are the most prominent names of this spectacular outfit. As to the liner notes of Le Havre, their first album, each member is involved in the artistic realisation as much as in the social, non-hierarchical organization of the ensemble. The idea is that the individual voice is not lost in the collective, but that everyone participates equally in the orchestral improvisation. The most important aspect is that all the individuals contribute with their uniqueness to the success of the whole, without hindering its collective character. In this case Émaille works as the powerhouse of the orchestra, together with Benoit Kilian she is the coachman on the coach box, driving the orchestra so that their tension doesn’t get lost. Le Havre was recorded during a three-day residency at Le Volcan, Scène Nationale du Havre, in April 2021, where the band had a three-day residency. What you get to hear is work-in-progress, a music full of abysses and emotional refractions. It’s one of this year’s absolute surprises.

Le Havre is available as a limited LP, which also contains a CD (with bonus tracks). 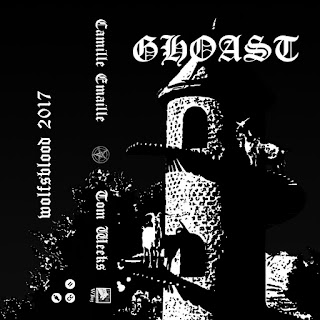 Ghoast is an almost classic saxophone/drum duo album that showcases Émaille’s strengths nicely. She supports Weeks whether he’s exploring the sonic limits of the saxophone or blowing wildly. A good example is “Devil Mountain”.

Ghoast is available as a cassette and as a download.

You can buy it and listen to it here. 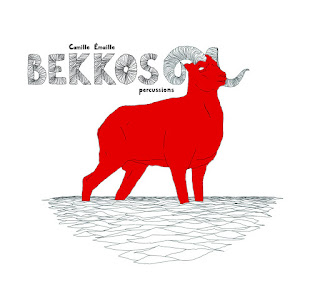 If you want to get to know Camille Emaille’s acoustic and sonic world in the most ideal way, her solo debut is your best bet. 46 minutes she ignites all the stops of her incredible musical cosmos.

Bekkos is available as a CD and a download. You can listen to it and download it here.