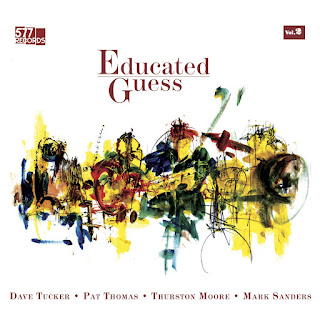 “I assume that he was shut up in that oval shaped studio and subjected to weird electronic music, which caused psychological confusion. Then, when he started to feel sick, he was given intermittent barrages of ultrasonic waves. I think that Waga knew that Miyata had a weak heart. In order to seal Miyata’s lips, Waga killed him by using electronic music and ultrasonic waves to cause a heart attack. I would like to stress that this is a method of murder that has not existed before.”

Dave Tucker is a long-standing member of England’s free improvising community, including membership in the London Improvising Orchestra and numerous small ensembles. His notable small group recordings include Homework (Grob, 2001) by School of Velocity (a quartet with Evan Parker, John Edwards, and Steve Noble) and Scatter (FMR, 2007) with Phil Minton, Pat Thomas and Roger Turner. By free improvisers’ standards, Tucker doesn’t record often, but when he does, it counts. That certainly holds true for Educated Guess, a title based on Tucker’s positive expectations when forming this quartet, in which he plays guitar and electronics with Pat Thomas on piano and keyboards, Thurston Moore on guitar and Mark Sanders on drums and percussion. Recorded at Café Oto on March 4, 2020 (immediately prior to the lockdown), the first and second sets as two separate volumes, the first in April of 2021, the second in May 2022.

There’s a certain shift in character between the sets. The first emphasizes electronics, often with Tucker and Thomas both exploring the electronic ends of their palettes. There’s an initial passage of tweaks, brrrs, twitters and blips, sufficient to suggest that the astronauts have arrived at the electronic heart of the alien planet; however, it’s anything but unpleasant; Rather, it’s a playful celebration of possibilities, friendly oscillators and slightly self-conscious sirens. The two tracks feel, as the titles declare them, like ‘The New Normal Part 1’ and ‘Part 2′. A drill-like fusillade might suggest a potential-press roll from Sanders, whose own role in this is at times a metallic animation of other materials. The more one listens to this, the less one cares about the dialogue between acoustic and electronic elements: it’s the collective creation that matters, and once divorced from the original space of its creation, the music wholly assumes a life of its own, the electronics As consciously crafted and as subtle as acoustic materials, even feeling familiar and melodic, almost autonomous. There’s an early extended passage in which Thomas concentrates on the lowest range of the piano, creating a near-funeral ambience. A certain compulsion to listen to the paths of individual voices is gradually overridden; If Thomas’s keyboards and Tucker’s electronics blur, or Moore and Tucker’s guitars overlap, it’s entirely the point, and even the propulsive role of Sanders’ drums can slip into a collective animation. Individual agency disappears into the collective experience, one of the most “natural” fusions of noise, electronica and acoustic instruments you’re apt to hear.

The second set changes those associations. Thomas’s emphasis turns to the piano, and it’s an immediate focal point. ‘Everything Is Something Part 1’ begins in sustained dissonant chords around which muffled guitar sounds and light metallic percussion assemble. The music becomes spacious, shaped by the contrasting electric guitars, one altered, the other initially clean, the two gradually converging with varying timbral mutations, a dialogue as alien and “normal” as the electronics of Vol. 1. Then a kind of light dance figures, sounding almost like a music emerge box, with a degree of eeriness. It gradually turns into a guitar and a kind of dreamscape that’s distinct from the playfulness. As the ensemble grows, marked by Sanders and the distorted guitars, there’s again the suggestion of a hive mind as well as a hive, as if the music does not arise as a process of exchange but as a continuous collective development in which parts literally emerge Continuously rather than as “individual” contributions, including a theremin-like melody that, though utterly unpredicted, sounds inevitable. Thomas’s piano is even more central to the brief ‘Part 2’, strikingly fleet, simultaneously precise and evanescent, but again a natural continuum, the stream-like flow of the group’s imagination defining it, a conversational flow brought to material and associations that are also somehow alien, a kind of collective automatic writing.