Normally the Berlin À l’armé Festival or the Festival Météo in Mulhouse are the summer festivals I attend. But having covered the Berlin festival three years ago, before Covid (and the ones before as well), I wanted to try something new this year. After its successful launch last year, the Cologne Jazzweek is entering its second year and the program seemed promising to me. Moreover, I have always liked Cologne as a city for its diversity and its ambivalence. As expected, I was not disappointed. The city is hot and dry, the Rhine river has shockingly little water, directly in front of my hotel is a street festival, in which early in the afternoon a lot of the typical Cologne beer (Kölsch) is consumed and cheap pop hits are bawled . At this point, I hadn’t even checked in at the hotel yet. As you might imagine, I was very excited about the first concerts.

The opening performance of Theo Bleckmann/Julia Hülsmann, Philipp Zoubek’s Placebo Domingo and Lucia Cadotsch AKI took place at the Stadtgarten, a nice location for jazz and alternative music. However, the Stadtgarten is a rather small venue, which can be rather easily sold out. For a thoroughly ambitious festival, this was a bit bashful, a bit more courage would have been quite appropriate. 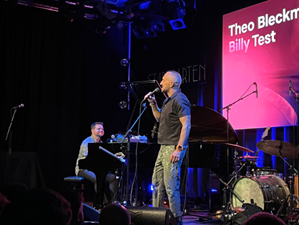 The first concert by Theo Bleckmann and Julia Hülsmann was then on the verge of being canceled because Hülsmann was ill with a severe stomach flu and Bleckmann needed a replacement at short notice. He found him in pianist Billy Test, one of his students at the Manhattan School of Music, and, it can be said in advance, Test did a really good job. Since Bleckmann is a rather well-known singer, he can obviously serve the mainstream and has also released on major labels such as ECM. Therefore, it was no wonder that the first show was packed. The average age of the audience was relatively high, but there were more women than usual at free jazz concerts. The whole thing was rather reminiscent of a theater evening. In that respect, it was actually fitting that Bleckmann and Test began with a version of Bert Brecht/Kurt Weill’s “Mack the Knife”, a tribute to Bleckmann’s 2015 A Clear Midnight album with Julia Hülsmann. But even here, the problem with Bleckmann’s technical approach became apparent. He’s certainly an excellent singer, but why giving Brecht/Weill’s depiction of 1830s London a sound reminiscent of Scandinavian fjord landscapes is beyond comprehension to me. In the following, Bleckmann and Test covered several pop classics, at first gaining new aspects especially from the Bee Gees classic “Stayin’ Alive”, since their melancholic touch actually fits the lyrics even better than the hedonistic one of the original. But the fact that Bleckmann then encouraged the audience to sing along destroyed the carefully created atmosphere. At the end there was Massive Attack’s “Teardrop”, which was interpreted not so far away from the original. Bleckmann showed here what he can do with his voice and that he is quite capable of sounding like Phil Minton. All in all, it was an ambivalent start, because although much was too emotional and mainstream. Yet, the concert was very entertaining. The audience rewarded it with a lot of applause, but already then I wondered how they would react to the next item on the program. 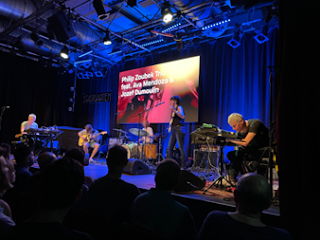 Placebo Domingo are the Philip Zoubek Trio, with the man himself on e-piano and electronics, David Helm (guitar, electronics) and Dominic Mahnig (drums), being reinforced with Ava Mendoza (vocals, guitar) and Jozef Dumoulins (e-piano and electronics). It’s easy to imagine that this was a total contrast to the first concert, but this is also in the spirit of the programming, because the organizers want to represent as many faces of the Cologne music scene and the scene beyond. Placebo Domingo played improvised space jazz rock in the style of the Miles Davis bands of the 1970s. All this they did very loud and Mendoza let her melodies shimmer over the electronic surfaces of the keyboards, reminding as so often of the unjustly forgotten SST guitarist Sylvia Juncosa and of course of Jimi Hendrix, if he had jammed with Frank Zappa. Particularly exciting were the rhythmic breaks, which sounded as if Sun Ra had fallen into Aphex Twin’s particle accelerator and been spat out again electronically contaminated. If one had underlaid the whole thing with a drum’n’bass beat, one could have danced to it. But then you wouldn’t have needed the great Dominic Mahnig, who steered the direction of the improvisation several times with his interludes freed from any beat constraints and who was responsible for making you feel as if you had gotten into Edgar Allen Poe’s A Descent Into the Maelstrom .The drive that the improvisation developed was jazz rock at its best; there was justified scene applause after the first part. On the other hand, many people left after 15 minutes. The missed large parts of the best band of the day. 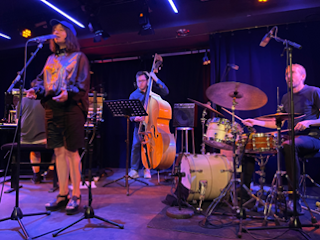 The evening was closed by Lucia Cadotsch AKI at Jaki, the basement location of Stadtgarten. Here the connection to the opening concert was made again, because Cadotsch (vocals) played with her band – Kit Downes (piano), Connor Chaplin (bass) and James Maddren (drums) – compositions, which they recorded a month ago and which will be released next year. In doing so, the band reminded of a classical piano trio with vocals. While their approach is less perfectionist than Theo Bleckmann’s, there was something more DIY about it. This was quite likeable and the packed basement (the concert was free) thanked it with warm applause.

After leaving the concert, one was directly confronted with the Cologne nightlife reality. Marauding twens sang “Daylight in your eyes” by the casting band No Angels and pushed a shopping cart full of alcoholic beverages in front of them. The street party in front of my hotel was in its final throes, drunks staggered onto the bike path. Jazzweek seemed like a parallel world in comparison.