The cello has never been a prominent instrument in jazz, but for decades there have always been musicians who have tried to explore its potential in improvisational contexts. Here are current releases from two of them.

” data-original-title=”” title=””>Eric Friedlander‘s album shows the possibilities in a cello serving as lead instrument in a jazz quartet. He fronts an excellent group with

” data-original-title=”” title=””>Ches Smith on drums in a session that covers a lot of ground. Their music is flowing and serene on “Little Daily Miracles.” sharp and funky on “Match Strikes” and swooping and manic on the Hebrew-tinged melody of “Chandelier.” Whether playing pizzicato or using his bow, Friedlander plays with sharpness and dexterity. His arco work over the swaying beat of “Glimmer” is particularly strong. “A Quiet Radiance” is the prettiest piece in the set, a gentle melody outlined by the leader. both with and without his bow, and beautifully fleshed out by Caine’s folksy solo. The pianist is a sympathetic foil for Friedlander throughout the session while Helias and Smith do their part with their usual class and sensitivity. 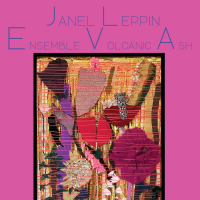 Janel Leppin is a Washington, DC-based cellist and composer who uses a wide range of instrumentation on this album. She features harp, saxophones, and electric guitar in a varied set of music. There are pieces like “Her Hand Is His Score” and “A Palace For Alice” where Leppin’s cello dives into an ethereal swirl involving harp, alto sax, or guitar but that is contrasted by harder-edged material. “Woven Forest” is built on a heavy swaying beat reminiscent of

“Clarity” comes more out of the realm of

All the members of this ensemble get their chance to shine through Leppin’s dense but expertly arranged works. For all its variety of sounds, Leppin gives this music a strong unity of vision and purpose. This mystical combination of jazz, rock, meditation, and psychedelia is one of 2022’s strongest recordings.

Tracks: Children of the Water; Woven Forest; She Had Synesthesia; I Pose; Her Hand Is HIs Score; Silvia’s Path; Volcano Song; Clarity; A Palace for Alice; Leaving the Woods.