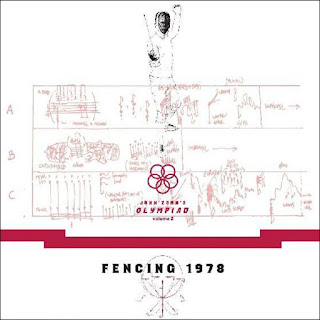 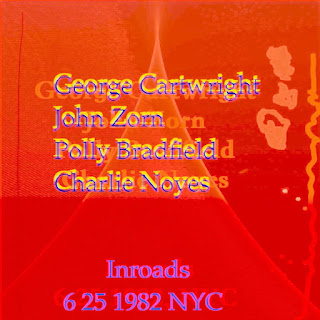 For many years, the seminal free jazz meeting Environment for Sextet was available in a very good mix from drummer Andrea Centazzo’s Ictus Records. And yet, this brand-new remaster from the original tape reals is revelatory. Centazzo has recorded a number of times at Outside Inside Studio, so naturally he worked with Matteo Bordin on this remaster. One thing that’s been consistent about Bordin’s work is how expertly balanced his mixes are (see, for example, Konstrukt’s Molto Bene ). The album is a classic example of the formal approach to free jazz in the burgeoning downtown NY scene. On two early graphic scores by Centazzo, a sextet featuring the drummer with Polly Bradfield, Eugene Chadbourne, Tom Cora, Toshinori Kondo, and John Zorn playing some of the most beguiling group improvisation. Remarkably, almost everybody here is fairly early in their careers: Bradfield, Chadbourne, and Zorn all appeared on Frank Lowe’s epic Lowe and Behold and had recorded School just ten months earlier; Kondo was fresh off recording Milford Graves’s Meditation Among Us; and this would be Cora’s first recorded appearance, to be followed by several Chadbourne albums. Only Centazzo had a sizable number of albums at the time, having performed and recorded with, among others, Steve Lacy for a number of years. But almost nothing predicts Environment for Sextet: the lineup is something of a miracle, gathered together as Centazzo was touring to meet and record with young players on both coasts. The initial album, USA Concerts, featured highlights from a number of sessions, but it was the release of “Environment” in two settings that made the biggest impact. Recorded live on the air at WKCR, November 7, 1978, the music displays an uncompromising dedication to the collective voice. Describing the mechanics of “Environment” would take away the magic of discovery, but the hallmarks of what we now consider collective improvisation all appear to be in place: smaller organized cells structured independently move in a gradual but nonlinear progression signaling something like momentum, but towards what remains undefined. There’s a charge in hearing these players so early in their careers, especially Bradfield, who remains relatively under-recorded, when she was still about a year from recording Solo Violin Improvisations.

Remarkably, another recording from 1978 has surfaced, featuring two performances of a classic Zorn game piece, “Fencing.” Before the guitar quartet Dither recorded a set of game pieces for Olympiad, Volume 1, “Fencing” had not appeared on any official recordings. Olympiad, Volume 2 starts with a quartet of Zorn, Chadbourne, and guitarists Duck Baker and Randy Hutton, recorded in July at the Theater of Musical Optics, a setting Zorn devised in his own loft. On the second, Zorn and Chadbourne are joined by Bradfield in a trio setting, recorded in August at Bard College’s Center for Creative Education. While Zorn’s game pieces can be somewhat challenging without context, given patience, any listener can hear the early stages of Zorn’s later soundworld. As the game pieces came and went through the years, eventually getting folded into “Cobra,” additional elements have found their way into books like Moonchild, Nova, Simulacrum, and even more “classical” settings like the Hermetic Organ, Turner Études, and other noted works. The quartet gives some clear sense of the overarching concepts in “Fencing,” which, as Zorn quotes from the score in the liner notes, “is concerned with harmony and counterpoint: what to choose to play with, against (at the same time) another player, choosing the 3rd, 4th, 5th possibility of harmony, etc.: unusual juxtapositions the aim.” In the trio setting, where the quartet posed a set of duels moving about each other, instead Bradfield, Chadbourne, and Zorn are in constant motion, often using nontraditional techniques to broaden their vocabulary, using the game’s rules as a jumping off point to some of the most provocative and innovative group improvisation. If these recordings were released fresh today, without any archival framework, they would still be among the most innovative performances of the year. As much as these players pushed boundaries at the time, the places they went to are still out of reach of most groups.

One more recent recording surfaced in the past year putting Bradfield and Zorn out front, a live recording of the two in a quartet with saxophonist George Cartwright and drummer Charles Noyes. In an hour-long live set recorded at Inroads. Captured in 1982, Cartwright was just getting started with his radical downtown group Curlew. His piercing sax style pairs well with Zorn’s. Noyes had already played on some of Zorn’s game pieces and with Bill Laswell in Material, and his drumming brings an occasional crunchy edge to the performance. The players poke at and push each other forwards in equal measure. Admittedly, the audio is not as polished as on the formally remastered albums, but the playing is absolutely worth it. To hear Cartwright and Zorn together is an absolute treat, there haven’t been any other recordings to feature them both on sax together. And to have even one more recording of Bradfield is a gift, and much of the improvisation highlights Bradfield in trio with Cartwright and Zorn. A few years ago, Cartwright also released a performance from Inroads of his early trio Meltable Snaps It with Bradfield and Arto Lindsay. Hope springs eternal that he has even more radical free jazz in his personal archive.