” data-original-title=”” title=””>Blue Notes, the band which introduced township jazz to Europe and whose members went on to become leading lights of the British jazz scene. one album, Legacywas recorded live in South Africa in 1964, the other, In Concertlive in London in 1977. (Makhathini’s album In The Spirit Of Ntua promo copy of which reveals it to be utterly sublime, will be released by Blue Note Africa in May 2022).

The Blue Notes’ story is one of triumph and tragedy. Before self-exiling to Europe in 1964, the band had been playing in South Africa for eighteen months in defiance of the country’s apartheid laws: pianist

” data-original-title=”” title=””>Louis Moholo-Moholo—were black. The band was harassed at every turn by the South African police and, once in Europe, five of the six musicians decided not to return home, becoming, in effect, refugees. Only Moyake returned to South Africa. After a few peripatetic months, the remaining quintet settled in London.

The Blue Notes established their presence on the British scene like a friendly riot, one in which state-sponsored violence and repression were replaced by exuberant jazz, often raucous, sometimes poignant. Rising above the trauma that refugee status brings, the band’s music—a mixture of kwela, small-combo swing and hard bop—exhibited a resolve to live life to the full. There was fire and there was lyricism. The Blue Notes were for a time the most exciting band on the British club circuit, no contest.

In 1969, McGregor formed the larger

” data-original-title=”” title=””>Brotherhood of Breath and Pukwana, Feza, Dyani and Moholo-Moholo went on to form spin-off bands, though they reassembled from time to time. 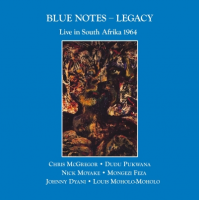 It is instructive to compare the Blue Notes’ music while they were still in South Africa with its evolutionary form in Britain during the second half of the 1960s and 1970s. In 1964 in Durban, where this album was recorded shortly before the Blue Notes took what proved to be their one-way ticket to the Juan-Les-Pins Jazz Festival in France, there is none of the anguish and fury that kicked in after a year or so of arrival in Britain, as the reality of separation from friends, family and homeland took hold. Legacy was made, instead, among and for people who wanted for a few hours an exhilarating escape from the grind and humiliation of life under apartheid. The seven-track album, which was first released in 1995, comprises four tunes written by Pukwana, two by McGregor, and a cover of Johnny Green’s “I Cover The Waterfront.” Most of the solos are taken by Pukwana and McGregor, whose brother, Tony, wrote the sleeve notes. Sound quality is acceptable. Pukwana’s talents are already well rounded, embracing tender balladry on “B My Dear” and, on the closing “Dorkay House,” giving a taste of the visceralism he would move to the front burner with his post-Blue Notes bands ” data-original-title=”” title=””>Spear and Zilla. An important historical artefact. 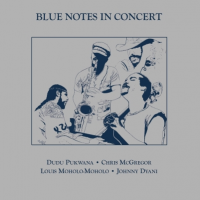 As the 1970s progressed, the Blue Notes, together and separately, became involved with free jazz and 1977’s In Concert reflects this. The album (some of which was released by Ogun in 1978) was recorded at the 100 Club in London’s Oxford Street by a quartet: Pukwana, McGregor, Dyani and Moholo-Moholo. The music weaves traditional South African folk music and band originals into an aesthetic that is distinct from both the American and European free jazz of the time. It is funky, intense, uplifting, a rebel Afrikan yell serving notice on the apartheid regime—semi-free rather than free jazz. The Blue Notes were never explicitly political and their music eschewed agitprop, but there is no mistaking the message. Decades later, long after the overthrow of apartheid, the absence of sloganeering is one reason why In Concert sounds timeless. The other reason, of course, is the level of musicianship. The album blazes like a bushfire. Essential.

RIP Growing up under apartheid and then becoming exiles took a heavy toll on the Blue Notes. Nick Moyake passed in 1969 aged 35. Mongezi Feza passed in 1975 aged 30. Johnny Dyani passed in 1986 aged 40. Dudu Pukwana and Chris McGregor both passed in 1990, aged 51 and 53, respectively.

Louis Moholo-Moholo returned to South Africa in 2005 and he is still very much with us.