It was a windy, warm mid-summer day when I sat down with a saxophonist
Jose Lencastre in the concrete amphitheater of the Gulbenkian gardens in Lisbon. We talked about his music, the flowering Lisbon scene, and his new baby, who was – at the time – about the same size of his alto sax. One topic concerned some of the upcoming recordings from the musicians on the artist run Phonogram Unit label that he and several musical partners had recently started.

The trio is Linkstre on alto saxophone,
Hernâni Faustino on electric bass (to date, I have known Faustino as an double bassist with acoustic groups like the RED Trio), and drummer Vasco Furtado. the first album, Ventowas reviewed by Stuart Broomer here and he points out the ‘expressionist potential’ of the group. This spirit continues to thrive on Forces in Motionand perhaps even intensifies through Faustino’s approach on the electric bass, which the round tones of the double bass are replaced with dry, staccato notes, articulated in the mix and making the grounding more ephemeral.

The album opens quietly, with a splash of cymbals and then though an extended welling of sound. The six minutes of ‘Dust’ rises and falls without ever kicking up too much of a cloud, though it never settles either. It leads to the 13 minute ‘Point of departure,’ which is a showcase of jittery bass work along with complimentary drumming. Lencastre probes the craggy contours and in turn weaves an expressive melody. Then the tempo picks up as the track progresses, Faustino is now playing a counter melody, while Furtado also responds with cracking stick-work. Lencastre is quick, he bobs and weaves throughout the buzzing rhythm work. The pieces reaches a breaking point and the three retreat. The third track, ‘Cascade’ picks up with the exploratory sound of Faustino’s bass, augmented by electronics. The drums and sax soon come in, Lencastre plays a searching melody and Furtado leans into the tom-toms. The three explore a deliberate theme that eventually builds to an intense apex. Lencastre, even when getting into the altissimo register doesn’t force his instrument, rather his sound is propelled by the centrifugal forces of the rhythm. This both holds true too on the next long piece “Lava Flow” that begins exploratory and builds to a peak with red hot melodic rivulets streaming down its sides.

The work of the trio on Forces in Motion is highly enjoyable. Accessible and energetic, at times exploratory and others awash in pulse and melody. 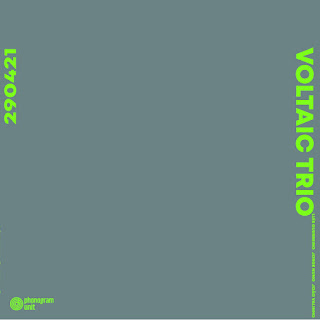 During our conversation, Lencastre spoke about his group Anthrophic Neglect, who were playing on the second weekend of Jazz em Agosto. For Lencastre, playing at the festival was an honor, as it has been an important part of his musical life. He cited some memorable shows that he had seen, then spoke about the group, and in particular, guitarist Jose Nunes.

Nunes is a part of the Phonogram Unit collective and his No Nation Trio released
Habituation on the label in 2020. Whereas that album was an exploration of acoustic textures and tones, this one is a face melting blast of electric and a wealth of harsh, but nonetheless fascinating rhythms and textures. The group is Nunes on electric guitar (and an expansive pedal board!), Luis Guerreiro on trumpet and electronics, and João Valinho on drums.

The album begins somewhat chaotically. A squelch of highly modified electric guitar – in which no guitar really needs to be involved – appears like a steamroller cutting through a haze. The trumpet then appears with a flurry of sounds like a swarm circling menacingly. After the initial sonic onslaught, the tension relaxes and each instrument is given space to strategize for the next attack. Soon the tension re-builds. The trumpet rings out, it’s natural sonic waves cut angular and sharp with effects. The electronics bleep and sputter, creating a swirling maelstrom and when the electronic fog lifts from time to time augmenting Valinho’s powerful drumming and Nunes’ biting guitar work. At times, one may be reminded of Miles Davis during the thickest part of his music in the 70s, though this trio goes deeper into the murky darkness.

Fierce and uncompromising, but also surprisingly textural and expressive, the Voltaic Trio is a noisy post-punk, avant-garde experience that offers tough listeners a rewarding challenge. 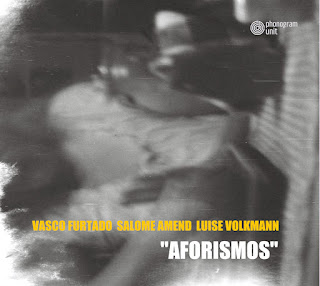 I mentioned that it was windy out that evening in Lisbon, right? So windy, in fact, that my recording of our conversation was rather inaudible, however, that hardly matters, as for this last one we’re leaving the area and following Vasco Furtado, the drummer on Forces in Motion, to his current residence in western Germany. Here, he recorded with two German experimental/jazz (this is really getting delightfully hard to categorize) musicians: saxophonist Luise Volkmann and vibraphonist Salome Amend. the result, Aforismosis an experimental/jazz album that unfolds in 5 improvisations of varying duration.

‘Folk Songs’ kicks off the album with a splash of cymbals, followed by Volkmann’s searching saxophone and unresolved chords from the vibraphone. Over a patter of percussion, the exploratory grows more assured, though never settled. Volkmann spends a good amount of the time quietly overblowing her instrument, but in playing in close connection with the percussive instruments, interlocked in self-perpetuating patterns. ‘Mechananimus,’ the second track, begins with Volkmann and Furtado instigating a moody atmosphere. Acoustic noises drawn from extended techniques and overtones fill the space, while ghostly notes from the vibraphone lurk in the background. As the track progresses, the playing intensifies, especially the saxophone, leading to the main track of the recording, ‘Intuitions,’ which unfolds slowly over 27 minutes. The quiet intro leads to a playful passage between the Volkmann and Amend, with Furtado insistently pushing the tension higher. The tracks’ energy ebbs and flows, from the initial dance to an extended exploratory passage carried by the varied percussive instruments, to an open soundscape led by Amend.

The album is, overall, one of restraint. Even the intense moments are not fire-blowing, but rather contained and crisp low flames. Little sounds and interactions are as important as the kinetic moments.